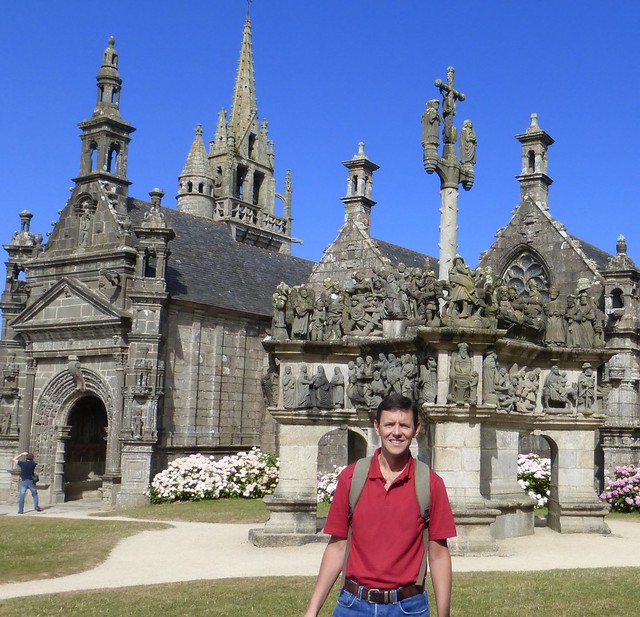 Next stop on my drive through Brittany was Guimiliau. Guimiliau is named after its patron saint and founder, Saint Miliau, a good and pious prince, descendant of the ancient kings of Britain. Beheaded in 792 on the orders of his brother, he is invoked for healing ulcers and rheumatism. 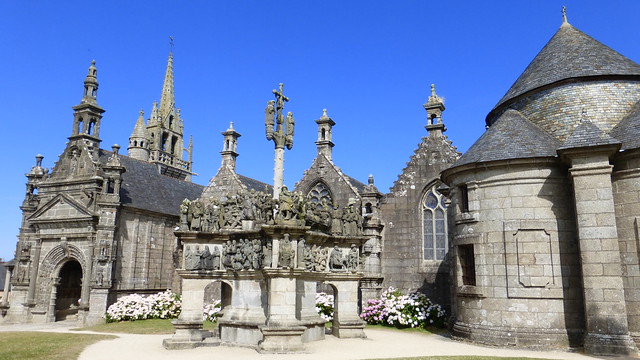 The fame of the small village is due to its remarkable parish close of the 16th century and to the magnificently ornamented interior. 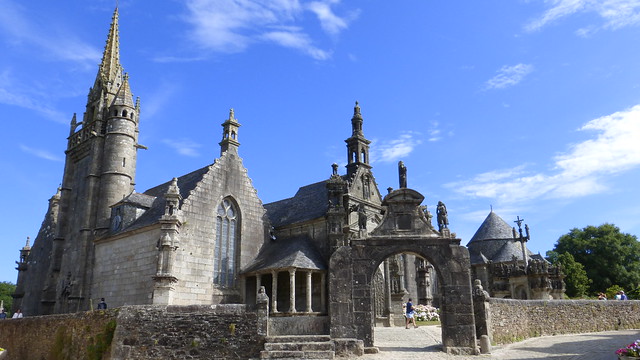 Entrance into the parish close is through its triumphal arch which is surmounted with a statue of the Virgin and Child. Beside them are two knights on horseback who act as watchmen. 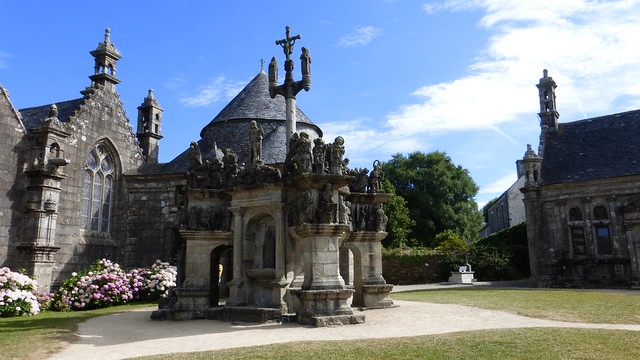 The Calvary, the most curious and one of the largest in the region, dates from 1581-8 and includes over 200 figures. 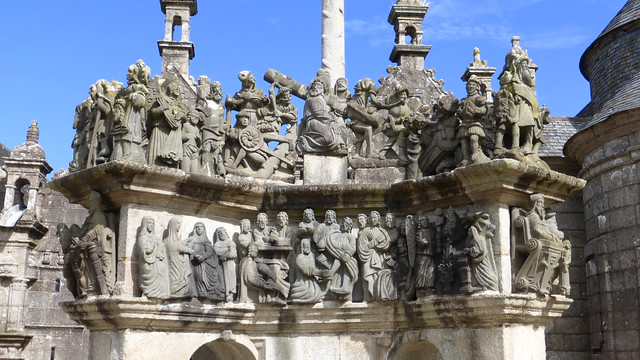 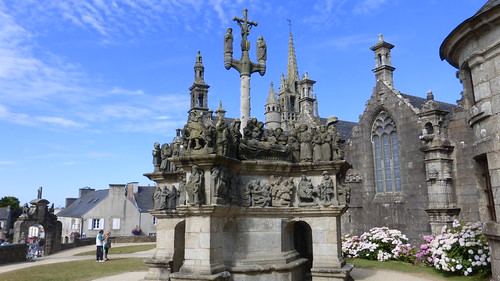 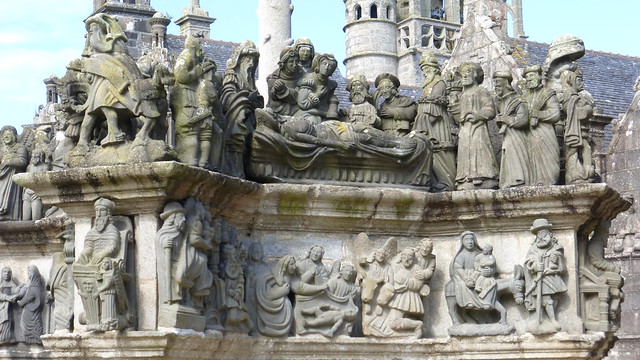 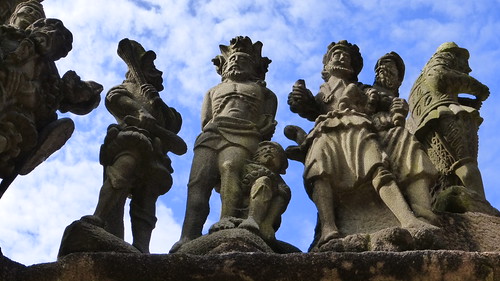 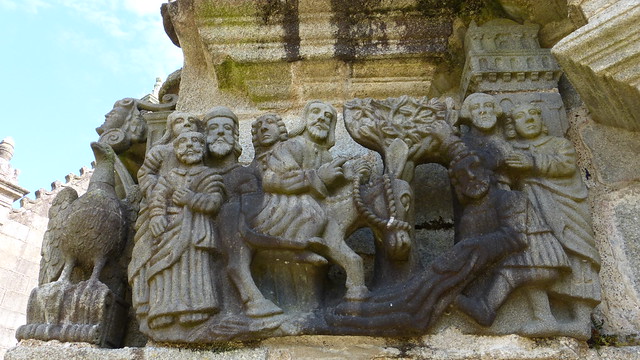 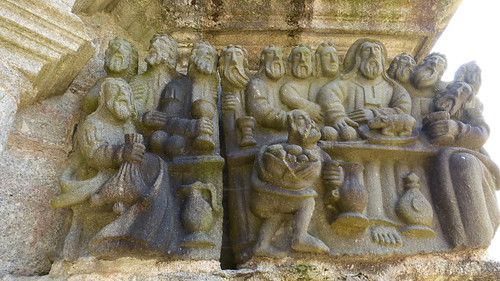 On the upper part stands a large cross with a thorny shaft bearing four statues; the Virgin and Saint John, Saint Peter and Saint Yves. On the platform are 17 scenes from the Passion and the Last Supper as well as a composition representing the famous Breton legend of Katell Gollet. Katell Gollet was a 16-year-old girl who lived only for pleasure and debauchery. She collected many lovers and one day, one of the men asked her to steal the host from the church sanctuary. Because she wanted to please him, she satisfied his request only to find out later that the man was actually Satan in disguise. This is the reason she is condemned to Hell for all eternity. 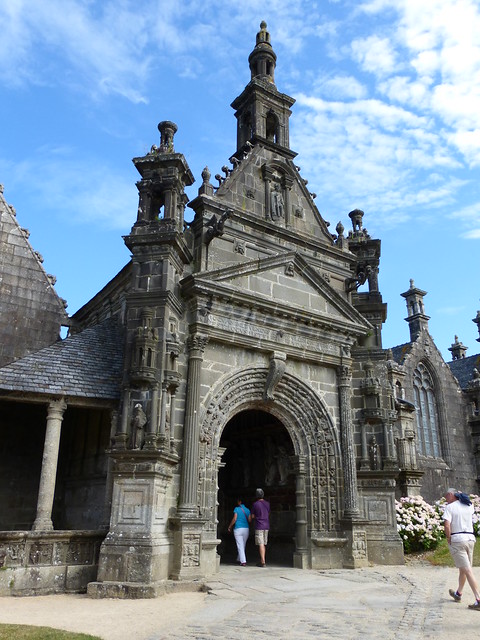 Upon entering the church, it is hard to miss the polychrome statues of the twelve apostles: 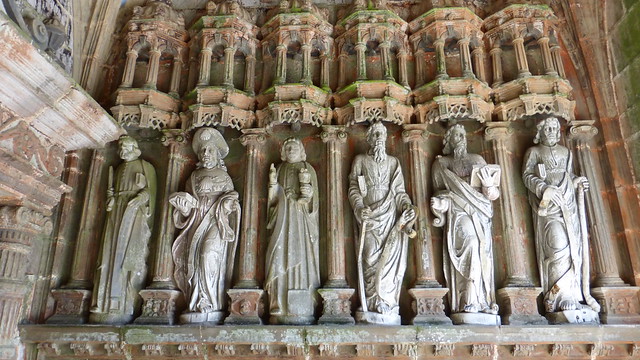 On the right of the porch: Saint Peter with his key, Saint James the Major with his pilgrim hat and shell, Saint John shaven and holding a chalice, Saint Andrew with his cross, Saint Matthew carrying a book, Saint James the Minor with a stick bent at the base. 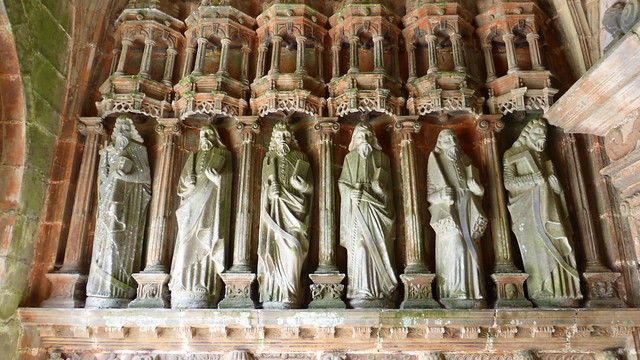 And on the left of the porch: Saint Philip with a Latin cross in his hands, Saint Bartholomew holding a knife, Saint Simon with a saw, Saint Jude with a palm, Saint Matthias with a hatchet and Saint Thomas with a square. To the left of the entrance is a fine carved oak baptistery dating from 1675. 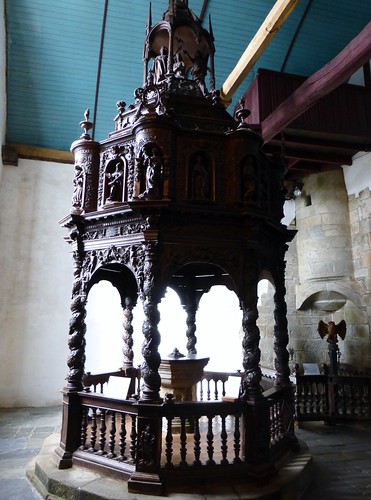 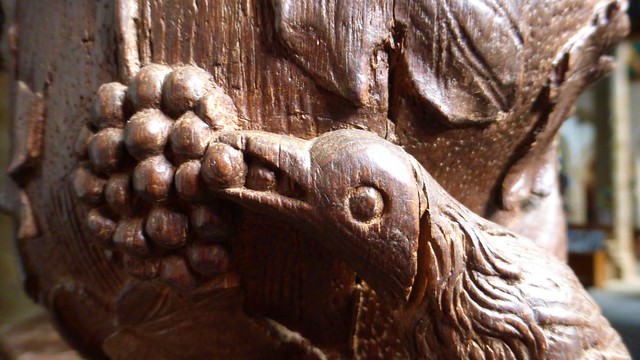 It is quite a marvel of carved oak with lavish and varied scenery depicting garlands, rosettes and patterns of all kinds. On the six twisted columns are birds, snails, snakes, wild berries and grape vines. 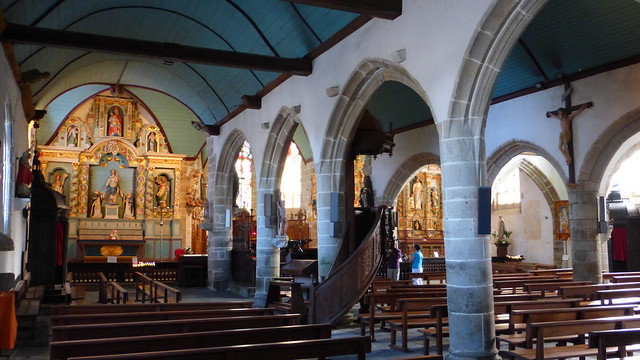 The interior has two naves with ceilings shaped like the keels of upturned ships as well as five different chapels. 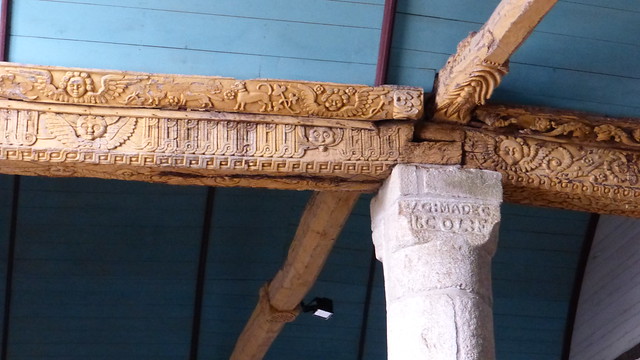 Each portion of the roof is held in place with finely carved and painted beams from the 16th and 17th centuries. 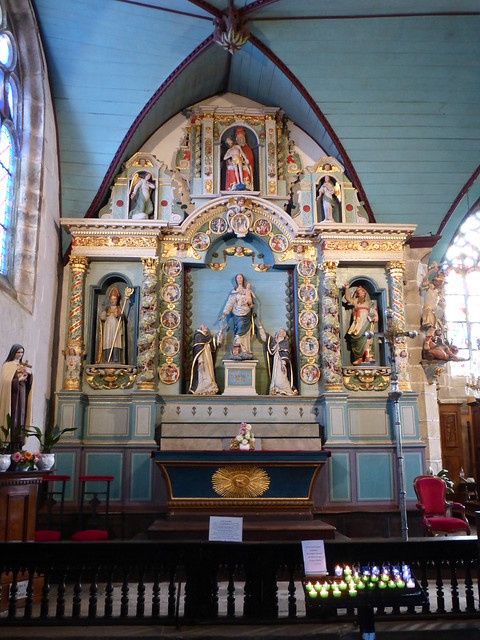 This is the Chapel of the Holy Rosary and features statues of the Virgin, Saint Dominic and Saint Catherine of Siena surrounded by other statues of Saint Nicolas, Saint Zachary and God the Father. 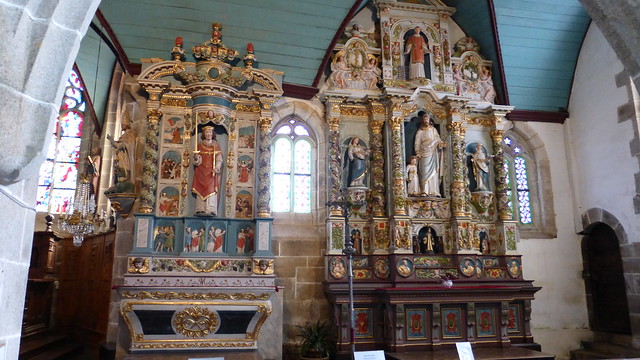 Near the main altar is the altarpiece to Saint-Miliau representing scenes from his life including images of him without his head and his wife supporting him. 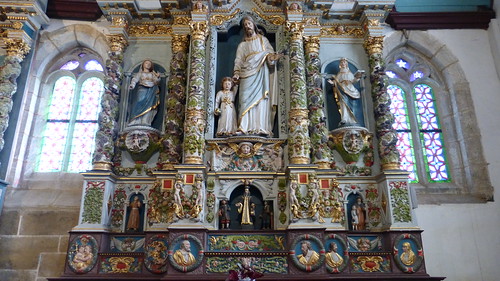 Beside this is the colourful altarpiece to Saint Joseph on which can be seen Saint Yves, the patron saint of barristers between a rich man and a poor one, and the blind Saint Hervé with his wolf that serves as his guide. 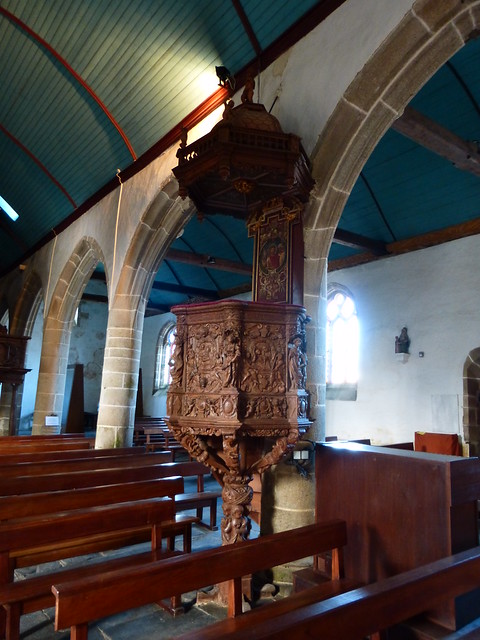 The beautifully carved pulpit is from 1677. Studied closely it offers unexpected subtleties of sculpture that include four plump Sibyls and three caryatids supporting the panels covered with medallions. 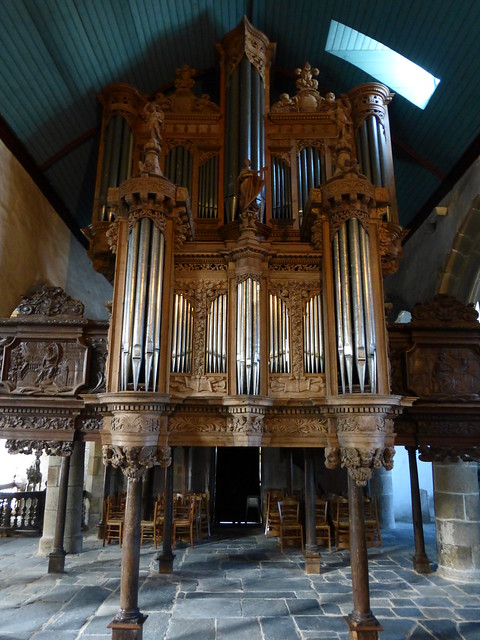 In the organ loft are three 17th century low-relief sculptures that include David playing the harp, Saint Cecilia at the organ and opposite the baptistery, the Triumph of Alexander.  Before leaving, don't miss the ossuary or funeral chapel that dates from 1648.  It is in the Renaissance style and has an outdoor pulpit set in one of the windows. 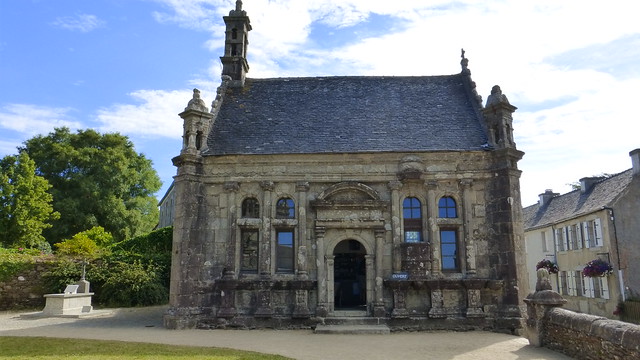