The parish close (enclos paroissial) is the most typical monumental grouping in Breton communities. The center of the close was the cemetery which was very small with gravestones of uniform size. Today this is tending to disappear. Around the cemetery, which is often reached through a triumphal arch, are grouped the church with its small square (placître), the Calvary and the ossuary or charnel house. The spiritual life of the parish therefore is closely linked with the community of the dead. The entrance to a cemetery is often ornamented with a monumental gateway. 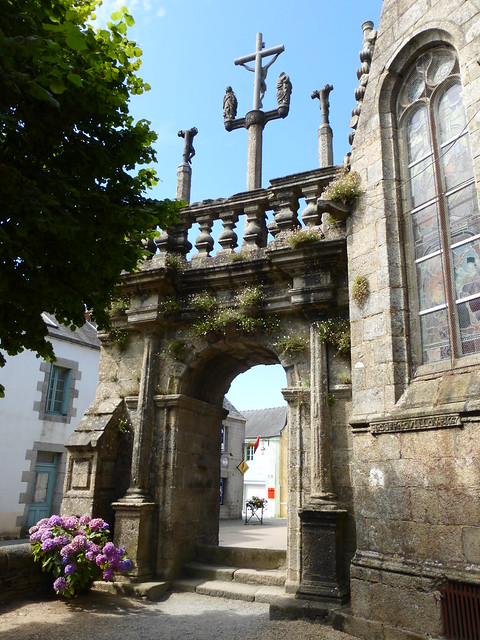 This is treated as a triumphal arch to symbolize the accession of the Just to immortality. At Lampaul-Guimiliau, the parish close is entered through the triumphal arch (1699) surmounted by three crosses as well as the statues of the Virgin Mary and Saint John. In the tiny Breton cemeteries of olden days, bodies had to be exhumed to make room for new dead. The bones were piled in small shelters with ventilation openings, built against the church or cemetery wall. The skulls were placed there separately in special "skull caskets". Then these charnel houses became separate buildings, larger and more carefully built and finally reliquaries, which could be used as funerary chapels. 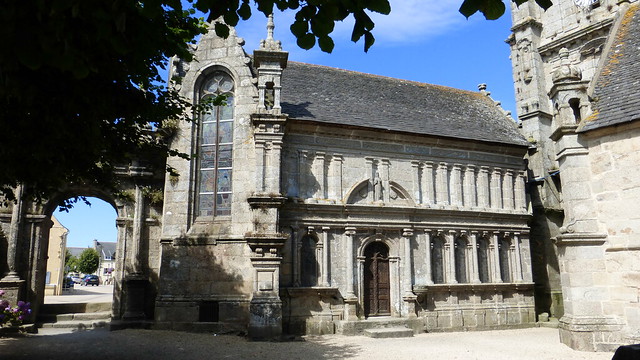 At Lampaul-Guimiliau the funerary chapel, a former ossuary (1667), abuts on the triumphal arch and has buttresses crowned with small lantern turrets. Formerly it also housed a notable tableau of the Entombment of Christ, which has now been moved into the church itself. Calvary is the name of the hill, also known as Golgotha, where Christ was crucified; its name was inspired by its skull-like shape (Skull; calvaria in Latin). Breton Calvaries representing scenes from the Passion and the Crucifixion are not to be confused with wayside crosses often erected at crossroads or near churches to mark the site of a pilgrimage procession. 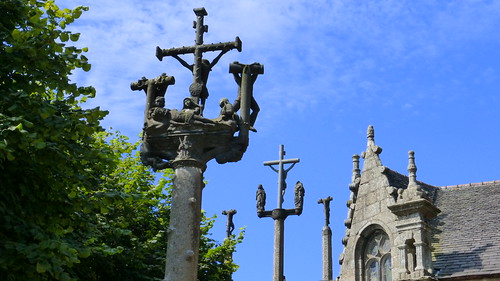 The unique Breton monuments illustrate episodes of the Passion, represented around Christ on the Cross. Many of them were built to ward off, as in 1598, a plague epidemic, or to give thanks after it ended. The priest preached from the dais, pointing out with a wand the scenes which he described to his congregation. The sculpture is usually rough and naïve—the work of a village stonemason—but it shows a great deal of observation and is often strikingly lifelike and expressive. Many figures, notably soldiers, wear the costumes of the 16th and 17th centuries. 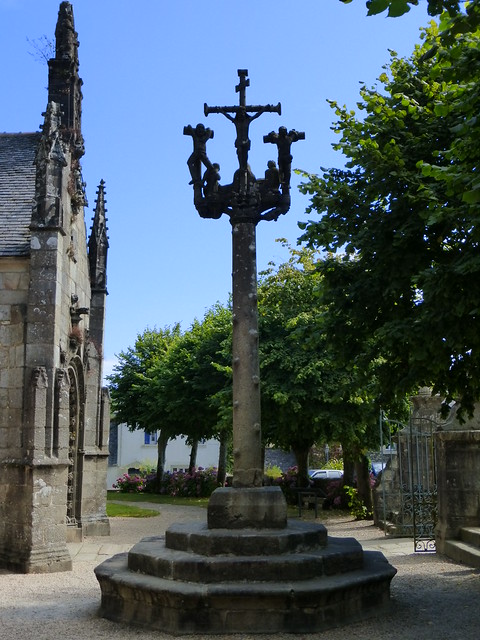 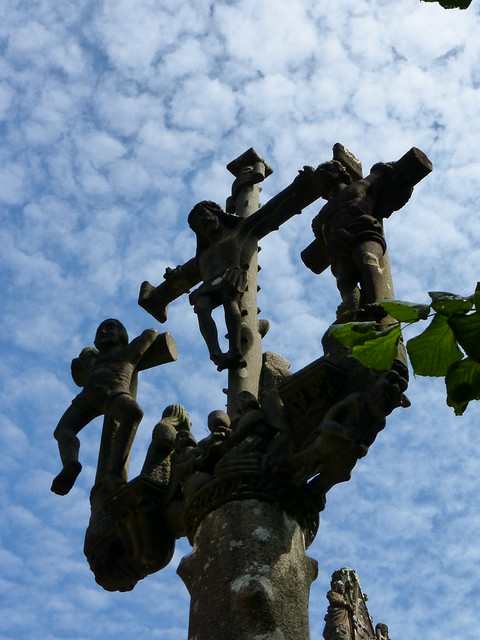 The Calvary at Lampaul-Guimiliau is the oldest in the parish close from the 15th century and features the Crucifixion on one side and the Descent from the Cross on the other. 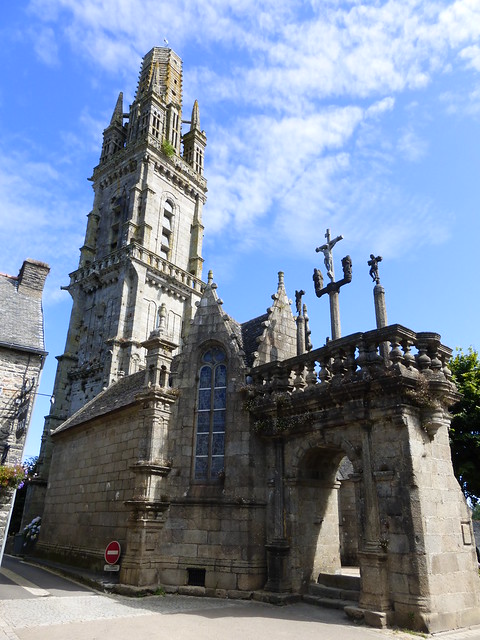 The church is dominated by a bell tower, constructed from 1573, and was originally one of the highest in Finistère. 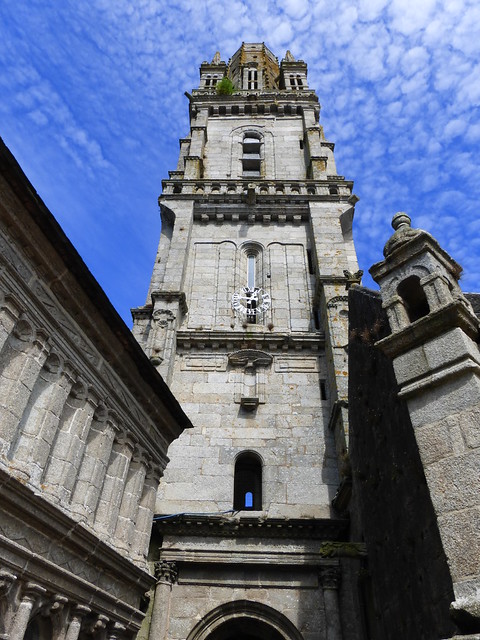 However it was truncated by fire following a lightning strike in 1809. Under a gable of the porch is a statue of Saint Michael defeating the Dragon. 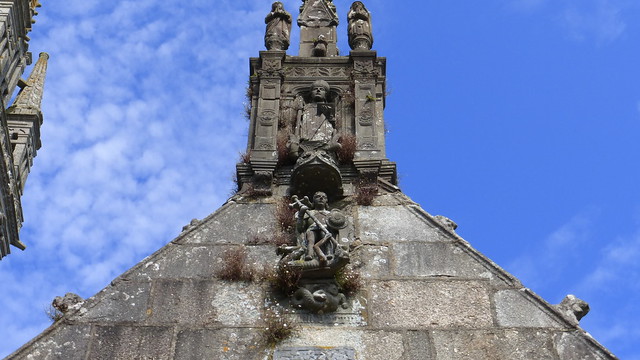 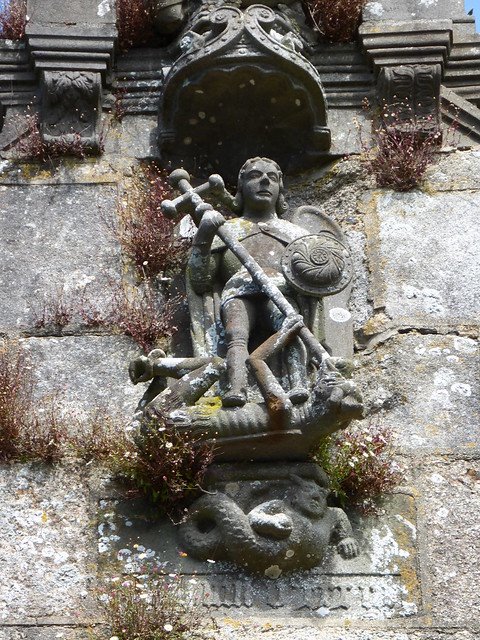 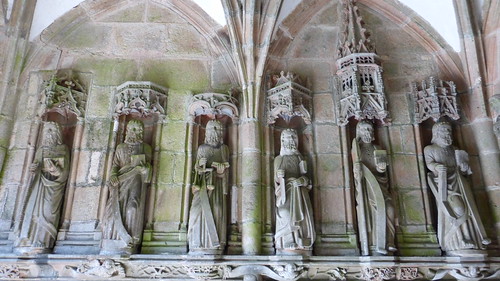 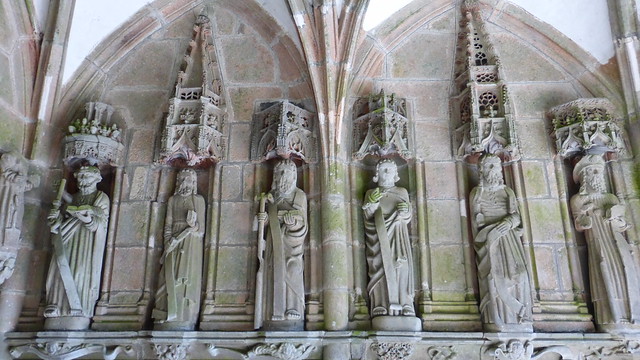 The porch itself dates from 1533 and like many other churches in the area displays the twelve Apostles. Inside, a 16th century rood beam spans the nave, bearing a crucifix between statues of the Virgin and Saint John. 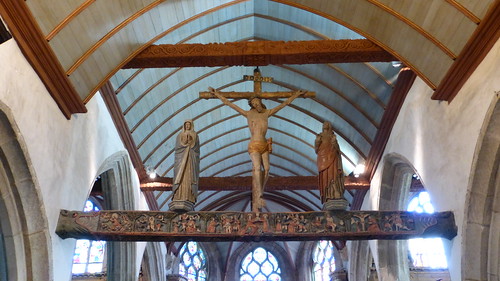 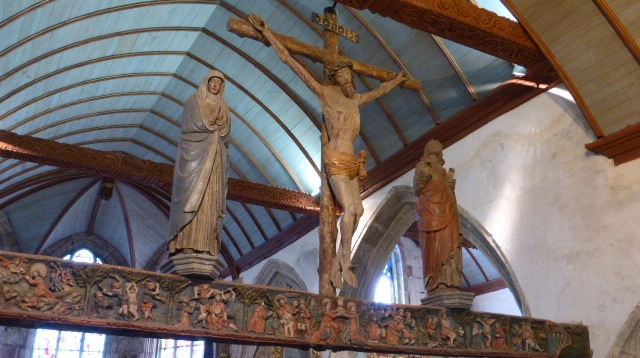 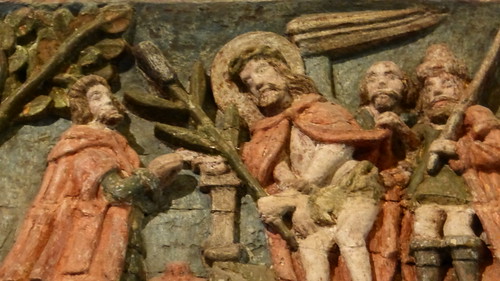 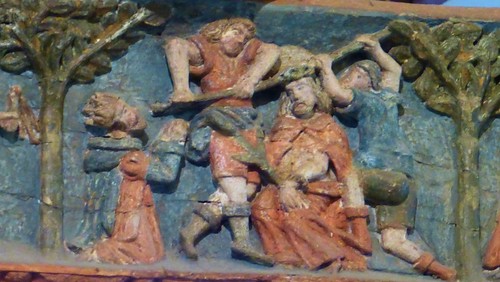 Both sides of the rood beam are adorned painted reliefs representing on the nave side, scenes from the Passion and, on the chancel side, the twelve Sibyls separated by a group of the Annunciation. 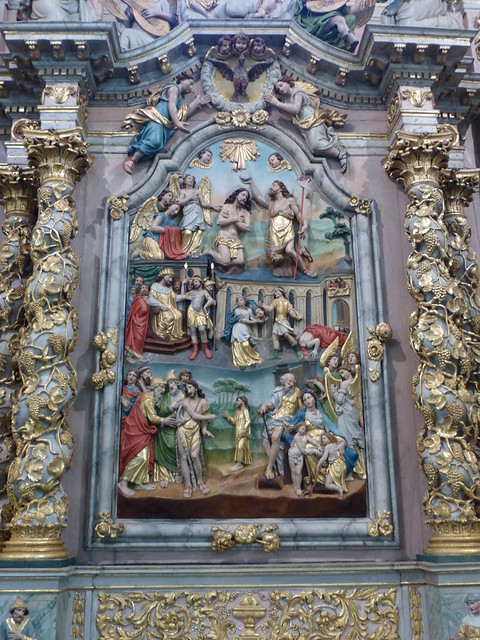 There are several altarpieces throughout the church including this one of Saint John the Baptist. 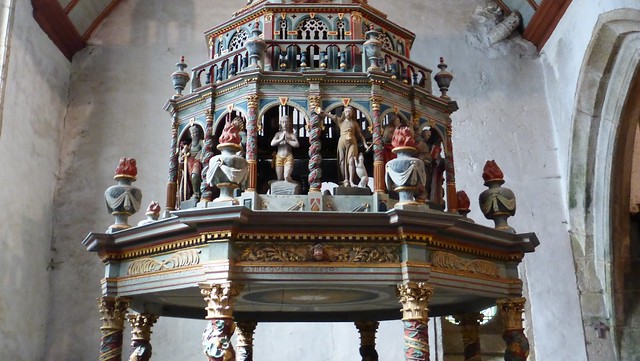 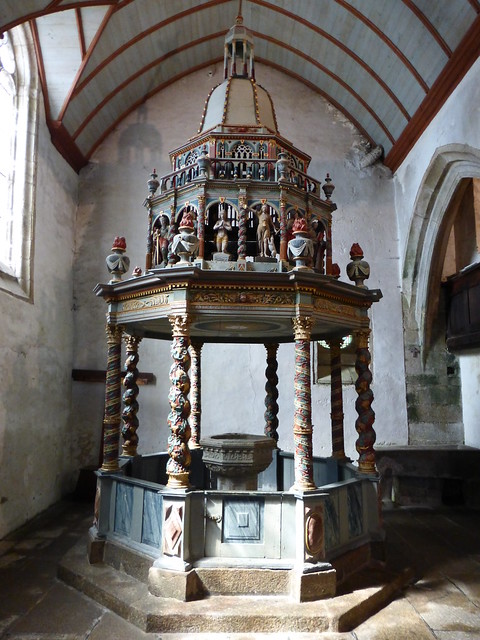 The baptistery is one of the most striking among the parish closes. It is an octagonal Baroque concoction, dating from about 1650. Unlike most of its kind, it is elaborately polychrome, with highly-elaborate pillars and finely-modelled representation of the baptism of Christ. 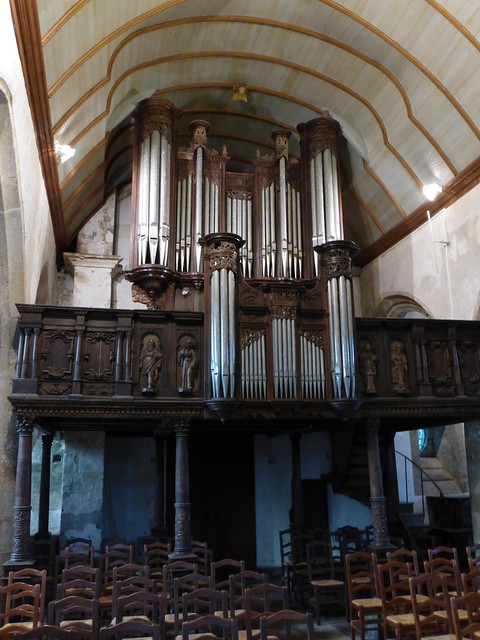 This is the organ and it dates from the 17th century. 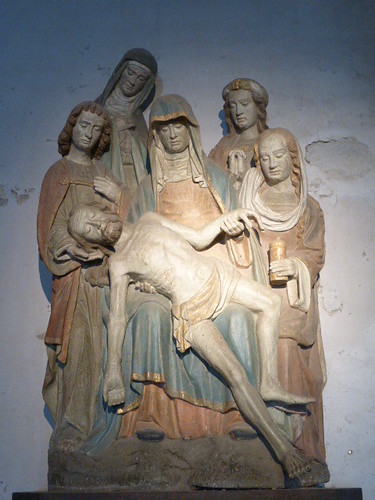 One of the most touching sculptures inside the church is that of the Deposition or Descent from the Cross (15th or 16th century). The Entombment tableau from 1676, by Antoine Chavagnac, shows Christ attended by Joseph of Arimathea, Salome, Mary Magdalene, the Virgin Mary supported by St John the Apostle, and Mary the Mother of James. 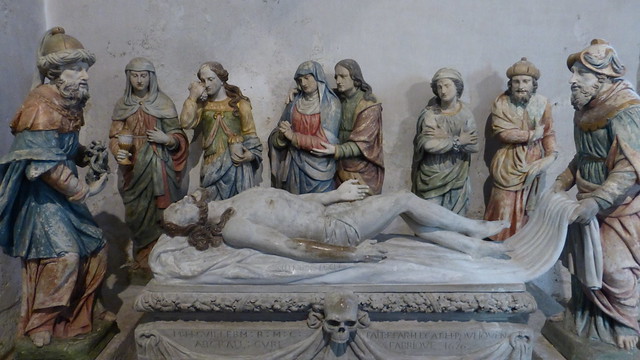 The figures used to be in the funeral chapel next to the triumphal arch.