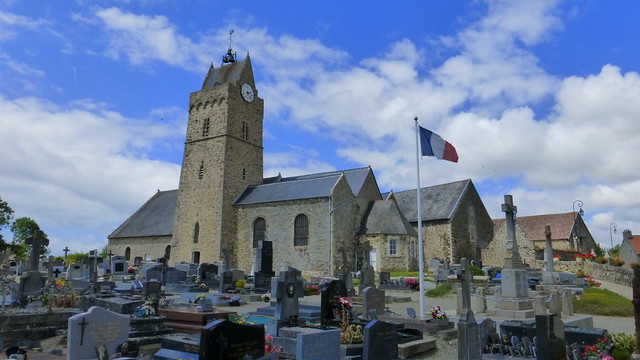 There is so much information about this town online that it is overwhelming. I’ll try to be concise and too the point but if you are interested in all the facts just check out their link online. After a long day of hiking and visiting old churches, I had one more stop to make in Saint-Germain-sur-Ay to see the old church and its priory as well as the old harbour now known as le havre which is watched over by the corps de garde, a 17th century guardhouse. 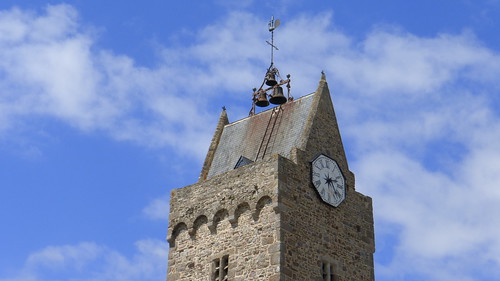 The Église Saint-Germain dates from the 12th century and has simple architectural design with an absence of a monumental gate. It therefore respected the Benedictine Rule which did not seek distractions of the mind. It is on the 14th century fortified bell tower that you can see a noticeable effort with sculpture—here there are eight windows, of which four have grotesque faces carved into corbels above the arches. 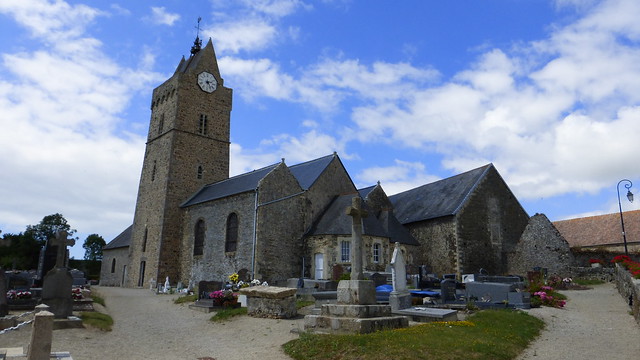 The tower also has false battlements which are simply decorative and devoid of openings for shooting. Despite this, the false machicolations were intended to strengthen the defensive tower and deter invaders. Indeed, in the 14th century English raids were frequent and deadly. The tower was part of a network of fortified churches in the Cotentin that could allow local populations to use them as defensive positions when needed. The inside has a single nave and two side aisles separated by simple Romanesque arches. 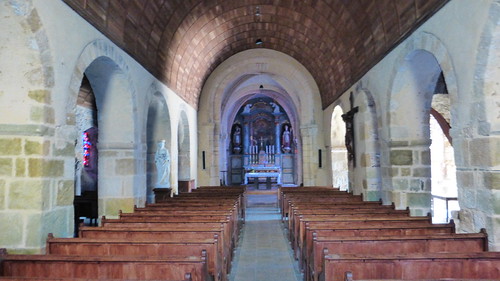 The choir and the nave are separated by another large Romanesque arch. Motifs of animals and plants adorn many of the capitals above the columns in the choir. 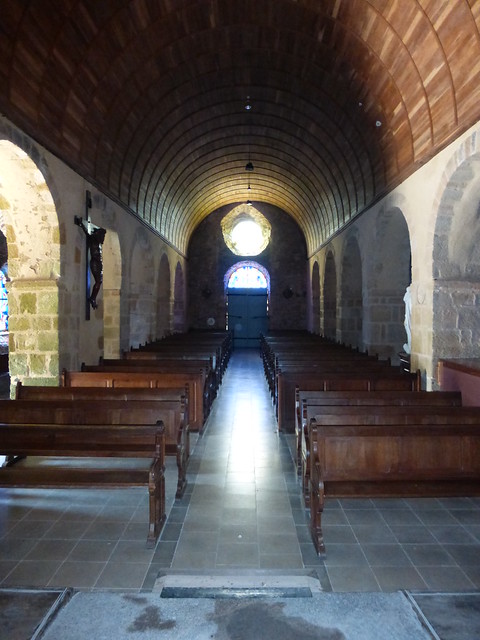 The nave is the part of the building with the least amount of decoration and has undergone the most changes over the last century which included new wood vaulting installed in 1954. 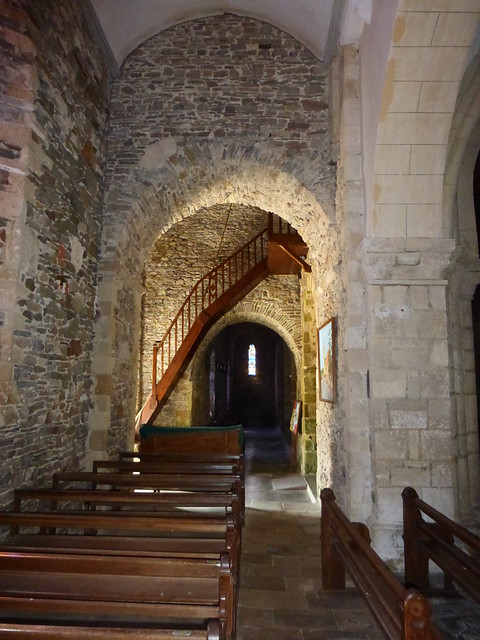 A staircase beneath the tower leads to the three bells of the church. Inside, the church has two works listed as historical monuments: 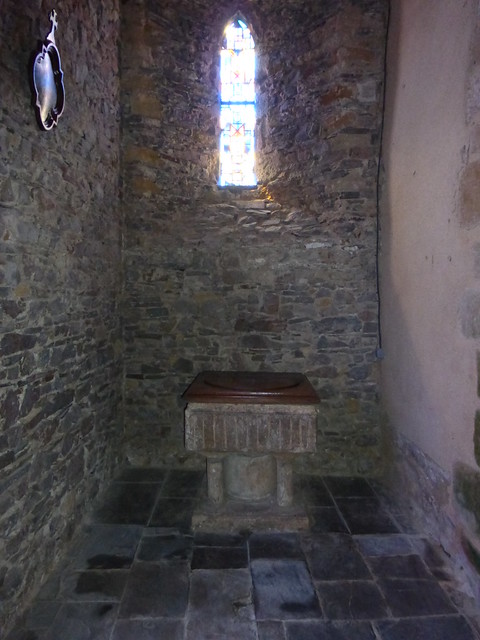 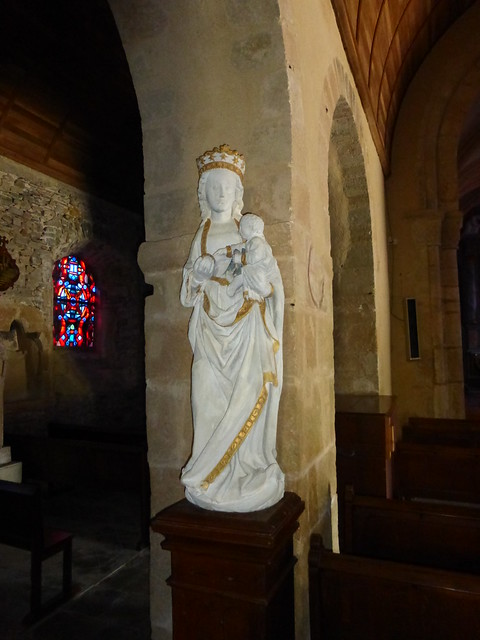 ...and the 15th century statue of the Virgin and Child. 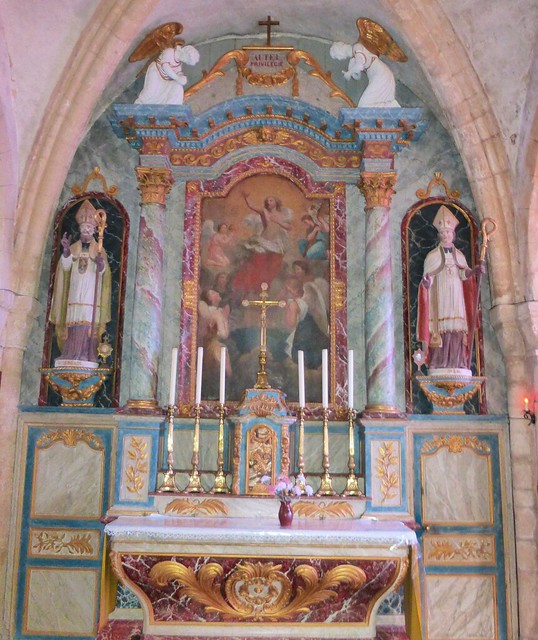 The wooden altar from 1828 is painted in faux marble with two kneeling angels at the top. On either side are statues of Saint-Germain and Saint-Lo with a painting depicting Christ’s Resurrection at the center. 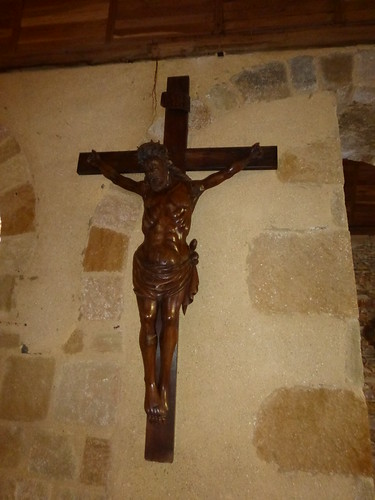 I found a source that says the crucifixion is from the medieval era but I really doubt that since it isn’t in the correct fashion for that time. 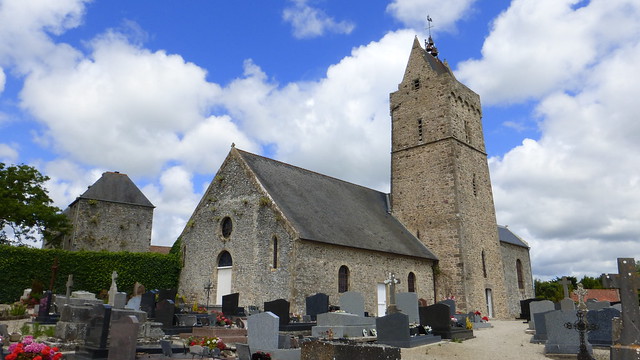 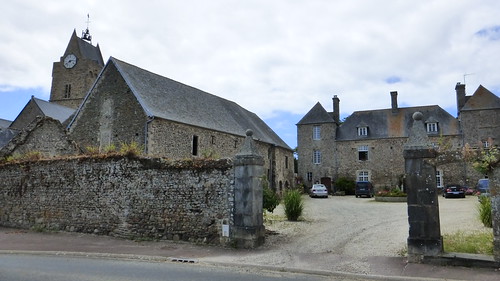 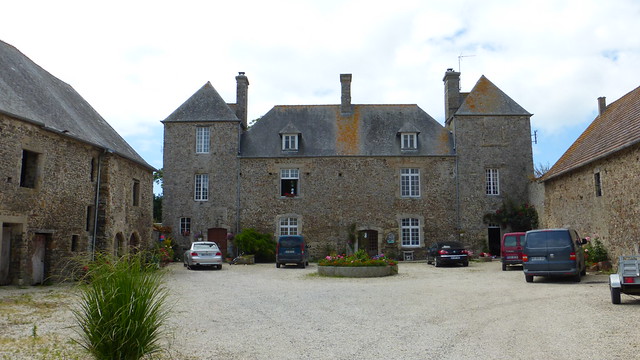 In the shadow of the church is the 12th century priory which was the home to Benedictine monks. 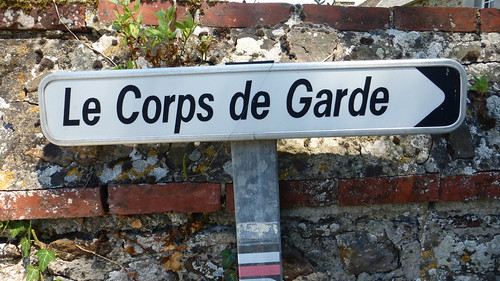 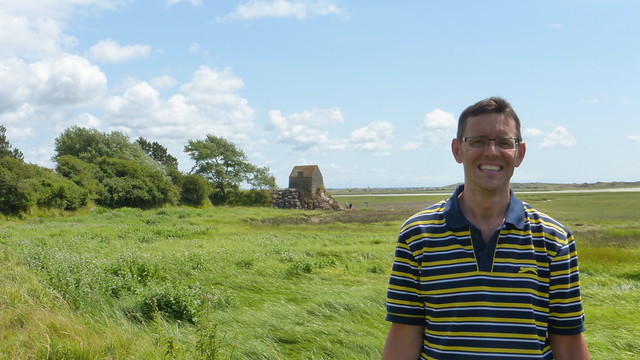 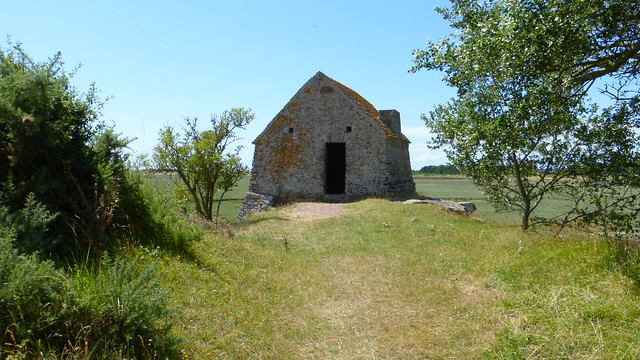 The corps de garde (guard house) has very old origins and is without a doubt part of a defence system whose purpose was to protect the region from Viking invasions. Although driven out of France in 1450, the English continued to harass the commercial fleet and to carry out raids in the country on the beaches by seizing merchandise, animals and boats at the quayside. 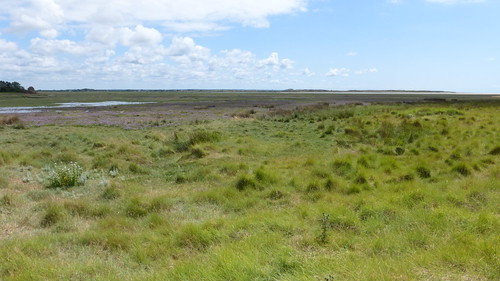 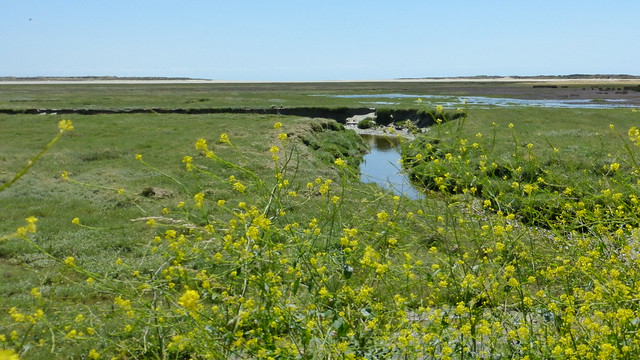 They attacked the ports of Cherbourg, St-Vaast, Carteret, Portbail and St-Germain-sur-Ay. Guard posts were built all along the west coast of the Cotentin in order to ensure the surveillance and protection of the marine traffic, particularly boats in the process of landing and unloading. The harbor (called, le havre in French) of St-Germain was much bigger than it is today, protecting the village of Salines, that you can see on the other side of the bridge, and possessed a very busy port receiving boats of 400 tons specializing in the commerce of wood, sea salt cereals and animals. The small village of les Salines owes its name to the practice of extracting salt which was done at this period. 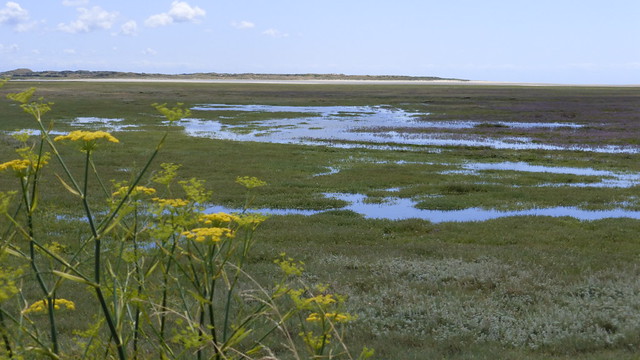 The sea, with the passage of time silted up the harbor and the commercial traffic collapsed. The guard house was built in 1659 on a rock five meters high, allowing one a view of the whole of the harbor. Under military command, it was run by 2 officers and 10 men. As a reprisal for the help given to the Protestants in La Rochelle, Richelieu ordered the destruction of the port facilities but the guard house was not touched. 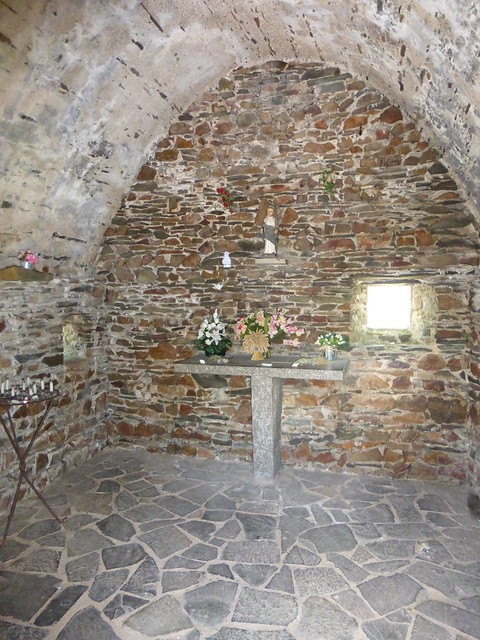 It was transformed into a chapel on the July 29, 1945 and assumed the name of Notre-Dame du Rosaire, but was called Notre-Dame du Grappillon (from the name of the place where the sheep of the salt marshes fed in the harbor) by locals. 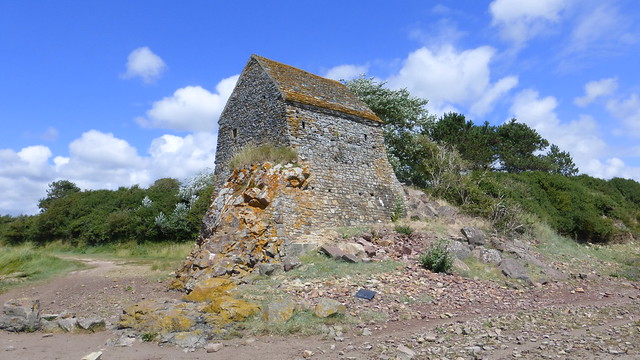 The families Deshayes-Alliot gave it as a gift to the commune on condition that it was to be restored to its original state. The commune accepted it and from 1977, at the instigation of the committee of preservation created that same year, volunteers carried out considerable restoration work. 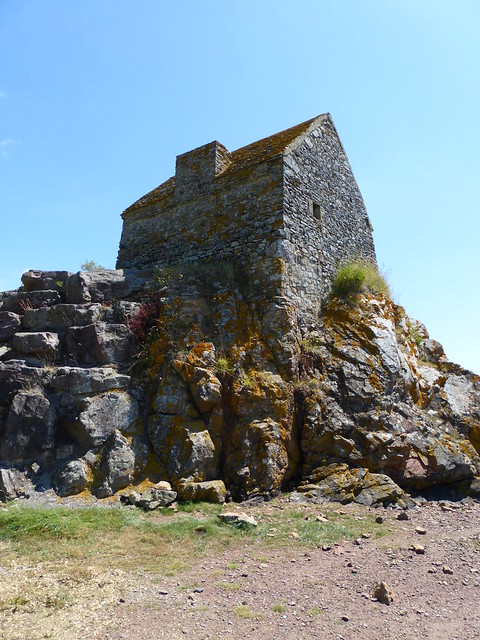 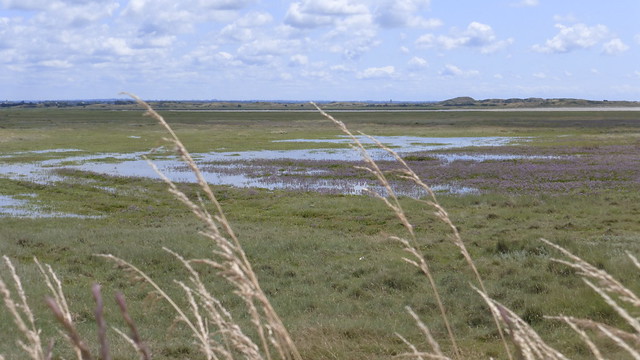