Just outside the small town of Colleville-sur-Mer, overlooking Omaha Beach, the American War Cemetery and Memorial contains the remains of 9,387 American military dead.  Unable to be located and/or identified, the names of 1,557 soldiers who lost their lives during the Normandy Invasion are inscribed on the walls of a semicircular garden just behind the memorial. 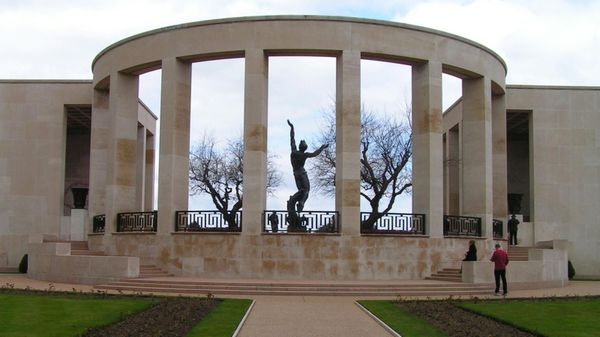 The eastern portion of the memorial garden consists of a colonnade with a loggia at each end containing maps of military operations.  On the north wall is a large map entitled “Military Operations in Western Europe” that records the progress of the military operations in northwest Europe, from the landings in Normandy to the end of the war.  The maps in each loggia were designed by Robert Foster of New York and executed by Maurice Schmit of Paris.  The American Battle Monuments Commission furnished the data for the maps. At the center of the garden is a 22-foot bronze statue, “Spirit of American Youth Rising from the Waves,” sculpted by Donald De Lue of Leonardo, New Jersey.  The Battaglia Foundry in Milan, Italy cast the statue. In the middle of the cemetery is the memorial chapel constructed from Vaurion limestone, granite, Pyrenees Grand Antique marble, and an impressive ceiling designed and executed by Leon Kroll of New York.  The colorful mosaic symbolizes America blessing sons as they depart by sea and air to fight for freedom and a grateful France bestowing a laurel wreath upon American Dead who gave their lives to liberate Europe. Behind the chapel at the western end of the cemetery are statues representing the United States and France.  Architects for the cemetery’s memorial features were Harbeson, Hough, Livingston and Larson of Philadelphia, Pennsylvania.  The landscape architect was Marley Stevenson. Built in 1862, la porte du midi has been, until recent years, the main gateway to the “Port militaire” also called “L’arsenal de la marine”.  For generations the workers and seamen who contributed to Cherbourg’s shipbuilding activities went through its gates on their way to work or on their way home; but in 2007, after the Direction des Constructions Navales Services (DCNS) took over operations, it was determined that the gateway precipitated safety issues and that it no longer served a useful purpose.  Therefore, the symbolic monument was moved from its original location within the Arsenal to a more visible address along rue de l’Abbaye. 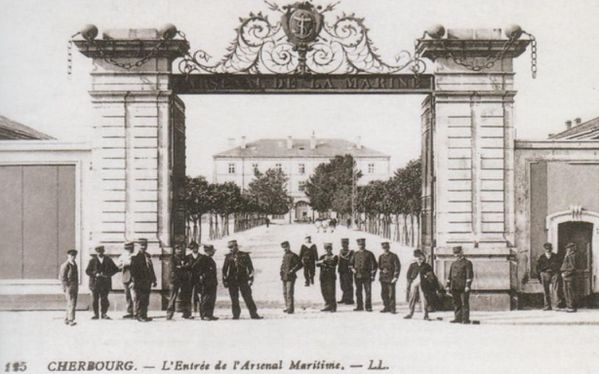 Published by The Baguette - in Équeurdreville Last night we had snow in Querqueville!  Sadly, it won't last very long since the temperatures are high and it is melting.  My friend who works at the La Hague Reprocessing Plant couldn't leave work until 7:30PM. The journey home was full of car accidents and people were encouraged to stay at work until they were told that the road was clear.  He didn't make it home until 9:00PM ! Did anyone else have a problem last night with the snow?  It seems that La Manche is not prepared for snow.  When it begins to fall, schools are closed, roads are blocked and everyone waits until the thaw. I wish I had taken notes when I was in Falaise.  I visited the famous church of Staint Gervais which is known for its two different architectural styles:  the south side is Romanesque and the north side is Gothic.  It was built between the 11th century and the 16th century.  I captured this photo of light along an unknown tomb from the stained glass windows.

Published by The Baguette - in Calvados 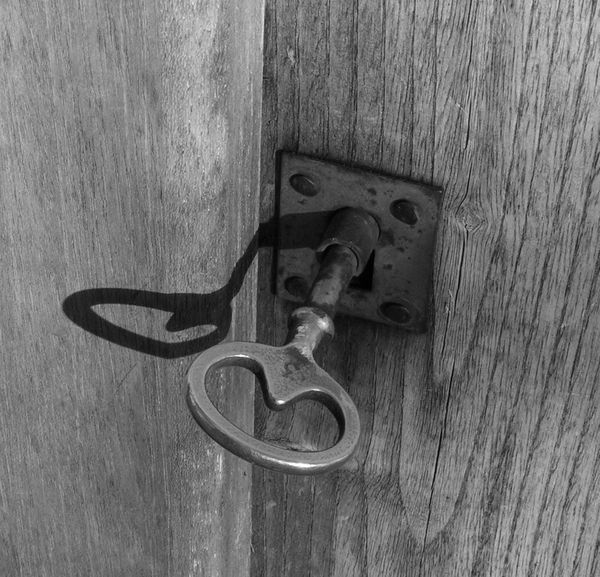 And all of a sudden I'm struck with an urge to unlock a door with a key that's too big for my hands and I drop it, and it falls at your feet. During World War II, nearly 75% of the down was destroyed by Allied bombs but the château escaped damage.  It was with fierce fighting against the British 59th Division in August of 1944 that the Germans left town and set fire to the château.  Sadly, the fire destroyed many public archives for Normandy including a library of 15,000 volumes, hundreds of family records and works of art of great sentimental and historical value.
Share this post The port city of Le Havre was devastated in 1944 during the Battle of Normandy.  5,000 people were killed and over 12,000 homes destroyed, mainly by air attacks from the Allied forces.  After the war, chief architect Auguste Perret rebuilt the city in the modernist style.  In memoriam to the five thousand civilians who died in the conflict, St. Joseph’s Church is one of the most recognizable symbols of the town, built of concrete between 1951 and 1957.  Its bell tower is 107 meters tall and acts as a beacon visible from out at sea, especially when it is illuminated at night. The Neo-Gothic interior of the church is monumental and impressive:  the square plan contains four clusters of four square pillars supporting the lantern. Stained-glass windows in the lantern and in the walls cast a kaleidoscope of colored lights that vary throughout the day. In 2005, Le Havre was designated a UNESCO World Heritage Site.