Étretat, now an elegant resort, has always had a great reputation because of the originality of its setting.  The grandeur of the high cliffs and the crashing waves is unforgettable whatever the season.  It is no wonder that the town has inspired many writers, artists and film directors. Maupassant spent is childhood here, “leading the life of a wild foal”, according to his own words, and Maurice Leblanc described the Aiguille Creuse through his famous character, Arsène Lupin.  Other famous personalities who helped to establish the fame of the town included Alexandre Dumas, André Gide, Victor Hugo, Gustave Courbet, Jacques Offenbach and Claude Monet. 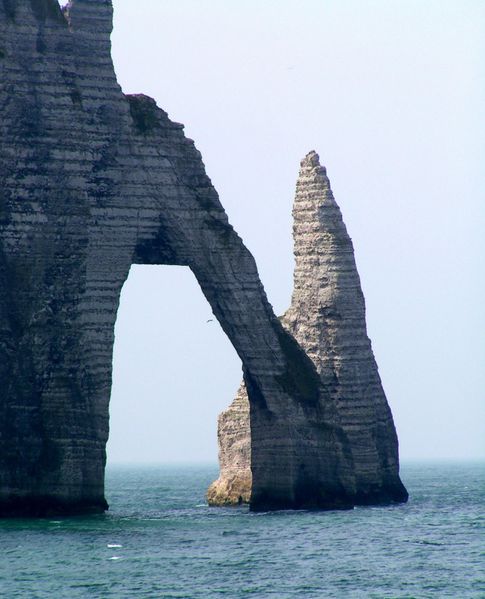 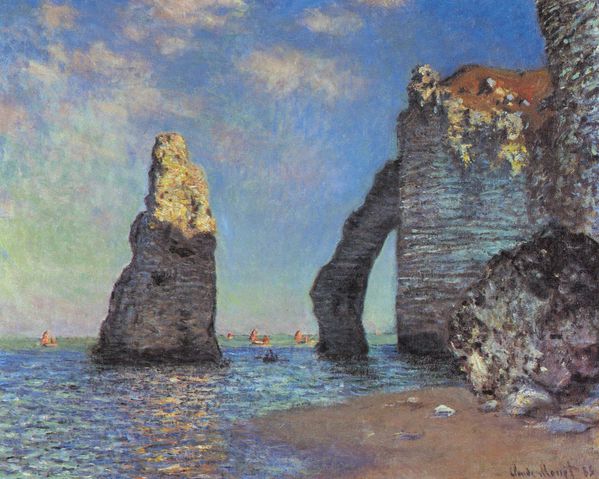 The single beach, skirted by a sea wall promenade, lies between the well-known cliffs; to the east the Amont Cliff with its small chapel Notre-Dame-de-la-Garde and its museum; to the west the Aval Cliff with its monumental arch cut through the chalk, known as the Porte d’Aval.  La chapelle Notre-Dame-de-la-Garde, was built in 1854.  It is both dedicated to the Blessed Virgin but also pays tribute to mariners lost as sea.  It was completely destroyed during the Second World War and then rebuilt in 1950. Offshore stands a solitary needle rock, the Aiguille.  On the beach are three traditional thatched fishermen’s huts originally used for storing fishing equipment but have now been restored and are used as outdoor coffee shops. 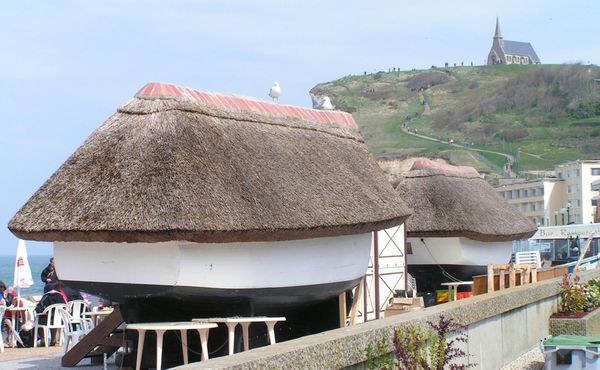 Published by The Baguette - in Haute-Normandie At the foot of the Gros Horloge in Rouen is the Louis XV fountain from 1743 representing a mythological scene depicting the love of the river Alpheus and the nymph Arethusa, symbolized by the figure of a Cupid flying above them.  Famous French architect, Jean-Pierre Defrance, built it on the site of another fountain from the 15th century.  It has been classified as a historical monument since 1889.
Share this post

Published by The Baguette - in Haute-Normandie 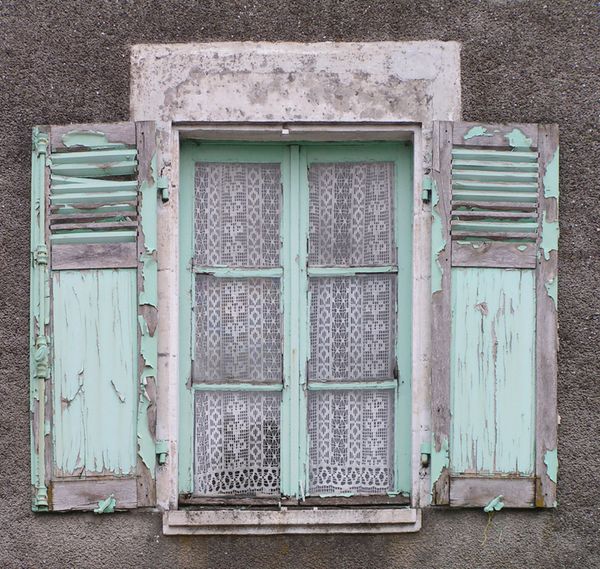 The small village of Catz is located just a few kilometers east of Carentan.  The best way to explore Catz is to ride your bicycle along the old farm roads and paths of the “Parc naturel régional des Marais du Cotentin et du Bessin.”  By taking this route, one can visit a number of small villages such as Brévands, Les Veys, Saint-Pellerin and Isigny-sur-Mer known for their quaint rural churches. I couldn’t find much information about Église Saint-Grégoire le Grand in Catz except that it dates from the 13th century.  Inside the church are a baptismal font made from limestone and three wooden statues which all date from the 17th century. 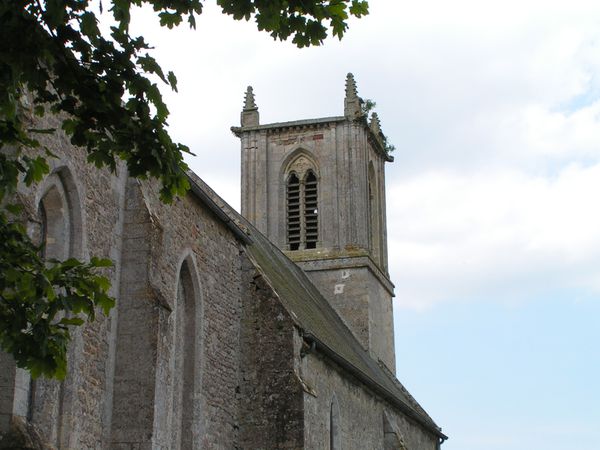 Published by The Baguette - in Cotentin 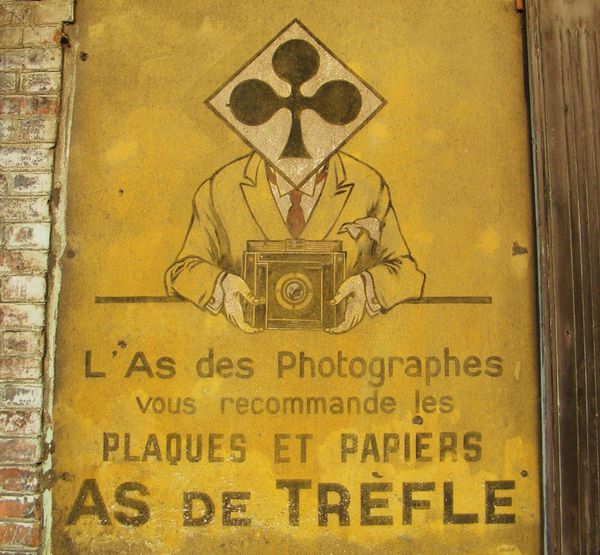 For five centuries, following the marriage of Jeanne de Gratot to Guillaume d’Argouges, the château belonged to the Argouges family.  In 1439 Jean d’Argouges sold the port of Granville to the English, thus giving them control of Mont-St-Michel.  This sale brought dishonor on the Argouges family but in the following century they redeemed the family name through appropriate marriages and proved their loyalty to the King of France. 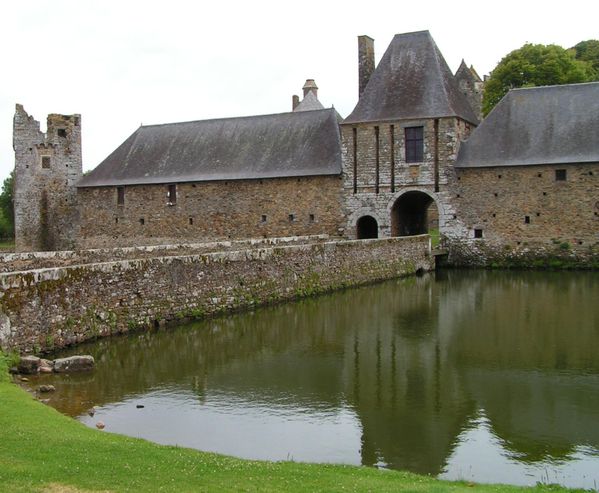 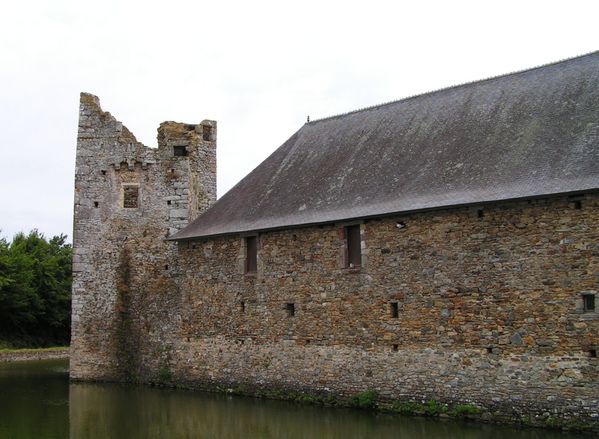 A small three-arched bridge over the moat leads to the entrance gatehouse and then the inner courtyard.  On either side are the bare walls of the service buildings; to the west are the ruins of a square corner tower.  Within the courtyard from the left to right are the 18th century pavilion and the 17th century main building, flanked by the Round Tower, and the Fairy’s Tower with the North Tower to the rear. 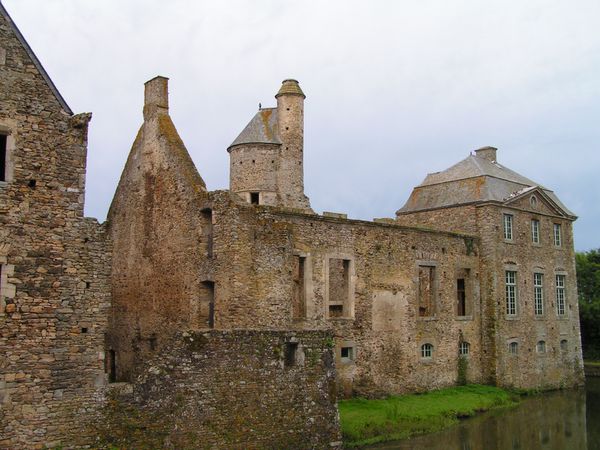 Two flights of steps lead up to the entrance of the now roofless former living quarters.  The ground floor was lit by tall windows and the upper floor by dormers. 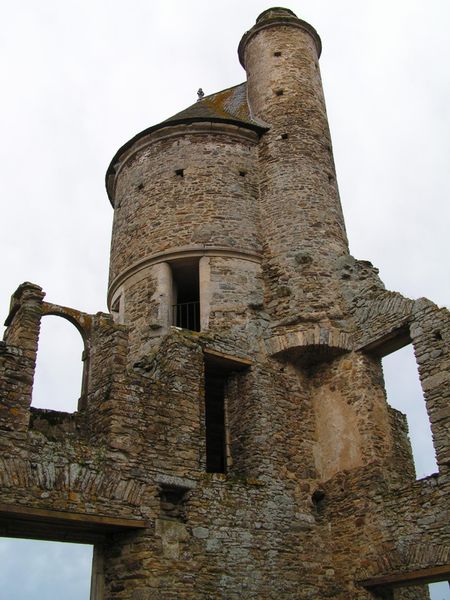 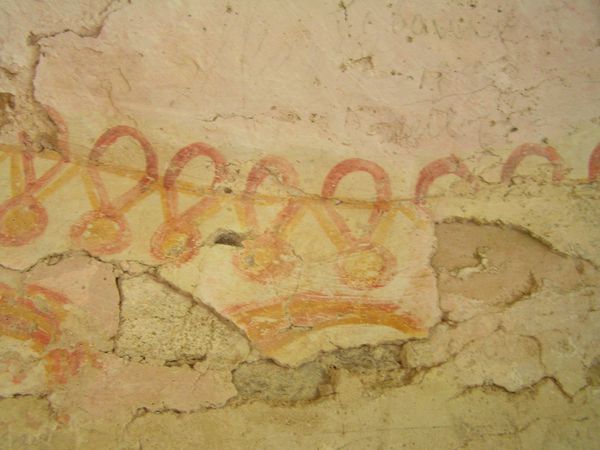 This early 15th century round tower is quite medieval in appearance.  The narrowing of the staircase as it moved upwards was devised to hinder an attack as only one person could pass at a time. At the top of the tower is a guards' room where remnants of medieval wall paintings may still be seen. The entrance to the basement is at the foot of this tower. Stout piers support the groined vaulting of these fine cellars.  The masonry is composed of stones placed edgewise.  The late 15th century tower, now called the Fairy’s tower, is reinforced by a powerful buttress.  It is octagonal at the base but becomes square at the top and is crowned by a saddleback roof.  The wall head is decorated with gargoyles and a balustrade. This corner tower, the only part of the medieval castle that remains, probably dates from the late 13th or the early 14th century; the door has been walled up. One of the rooms in these 16th century outbuildings hosts an exhibition on the château, its construction and ongoing restoration. Made specifically for Cherbourg, the quays (quai, in French) downtown are adorned with conical light structures that change from shades of green to blue depending on the amplitude of the tides.  They were installed by the artist Yann Kersalé in May 1994.