After a day of hiking and then a visit to the German gun batteries, I then drove to Montebourg to visit the Abbaye Sainte-Marie. Strangely enough I've never been there even though it's so close to Cherbourg. 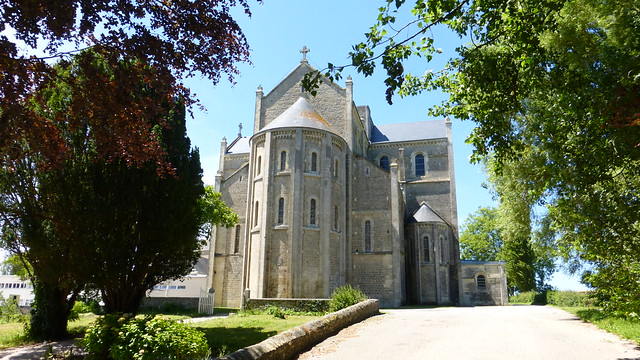 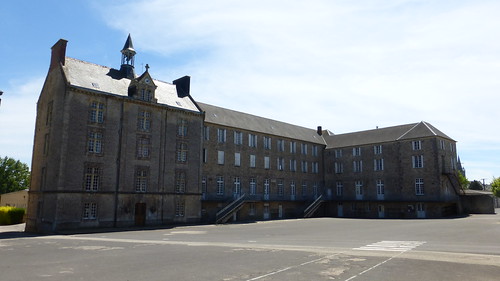 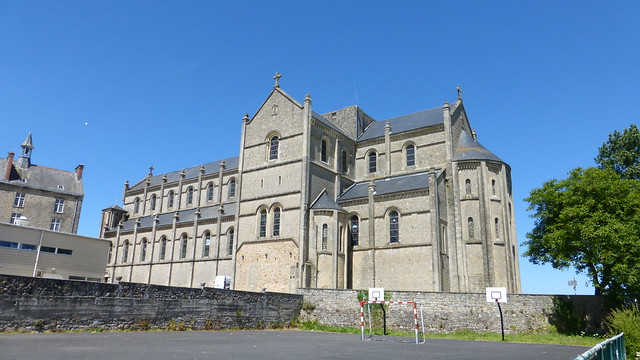 The origins of the abbey can be traced back to William the Conqueror in the second half of the 11th century but its legendary beginnings are a lot more interesting, albeit a lot more far-fetched (read it for yourself... I don't think it would be a miracle if someone came ashore in a boat one morning, would you ?) Anyway, the legend, written down in the 15th century, tells of two monks from the Savoie who spent the night on a Normandy beach. One of them (no name given) decided to sleep in a boat that had washed up on the shore; the second, Roger, preferred to sleep on the beach. 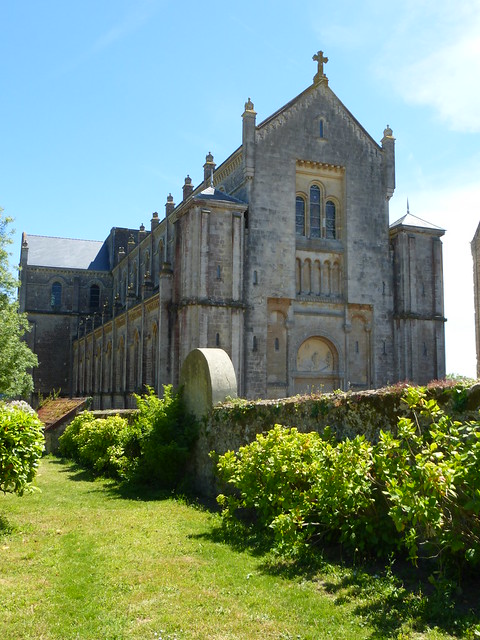 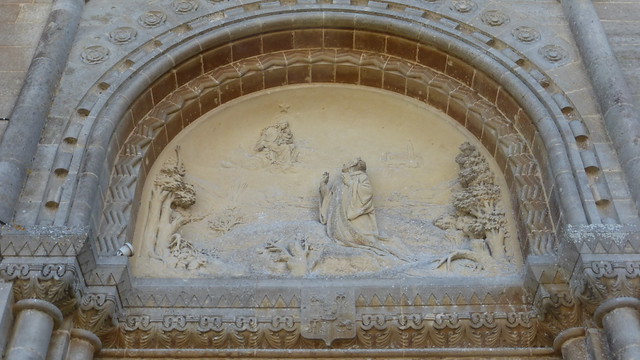 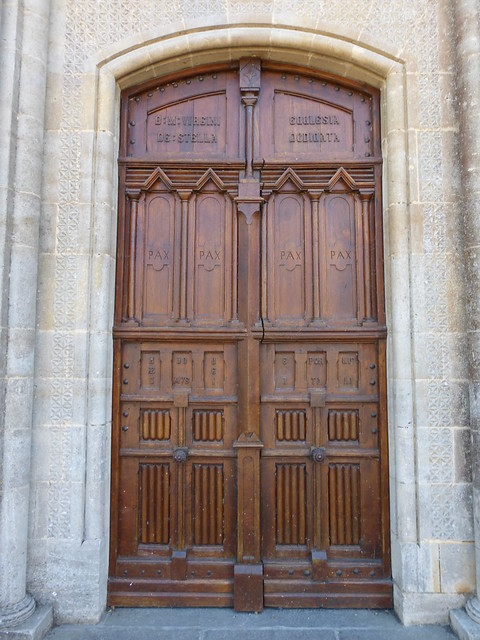 The tide carried the boat and its occupant all the way to the English coast where he was elected bishop by the people who were stunned by this "miracle". In Normandy the next morning, Roger went in search of his companion who disappeared. Tired, he stopped one night at the foot of a hill in Montebourg. He fell asleep and dreamt that a star had fallen on top of the hill. The Virgin appeared to him and told him that he must build a chapel there in her honor. Upon hearing of these events, Duke William gave Roger land, materials and various rights in the forests of the Cotentin in order for Roger to build his monastery. The abbaye de Montebourg was consecrated only in 1152, in the presence of the Archbishop of Rouen Hugh of Amiens, the bishops of Coutances and Evreux, and local lords, including Guillaume de Vernon, patron and protector of the abbey. The buildings were destroyed during and after the French Revolution, but the church was rebuilt in neo-Romanesque style between 1892 and 1933. Today, the abbey buildings are occupied by a private agricultural junior high and high school. 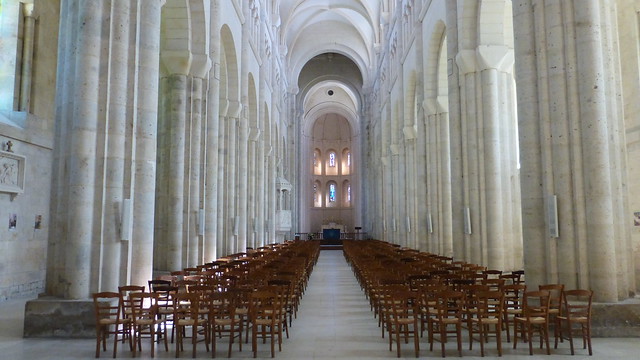 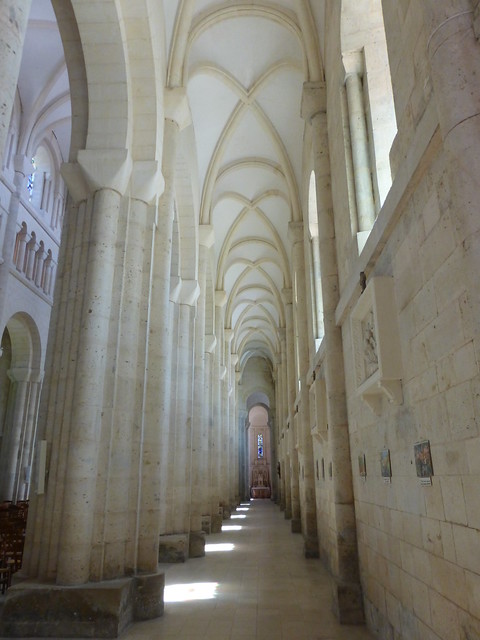 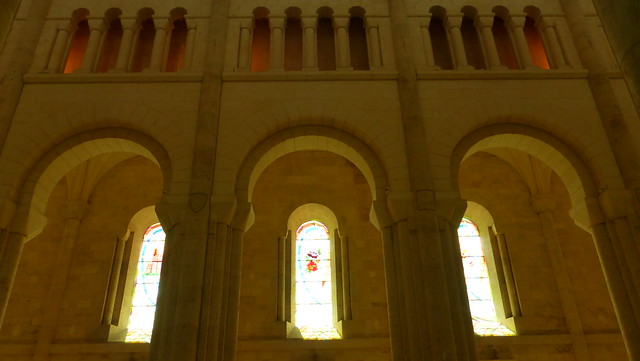 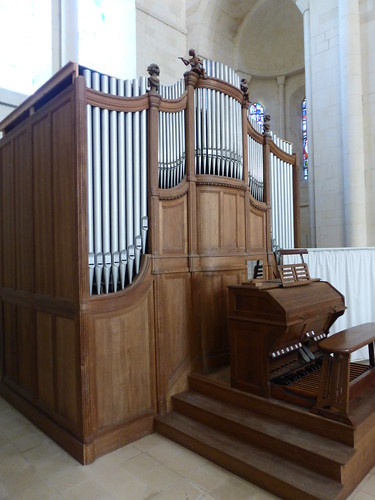 The interior is very clean and bathed in light from the stained glass installed in the 1950s. 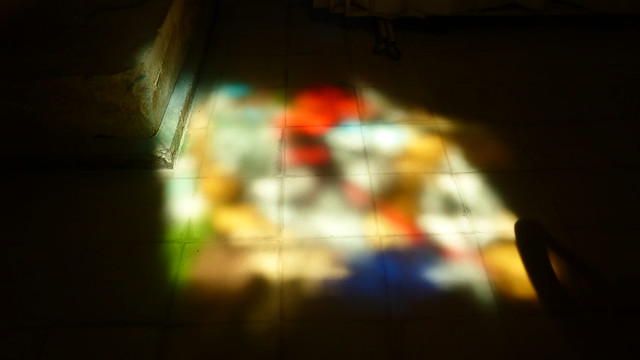 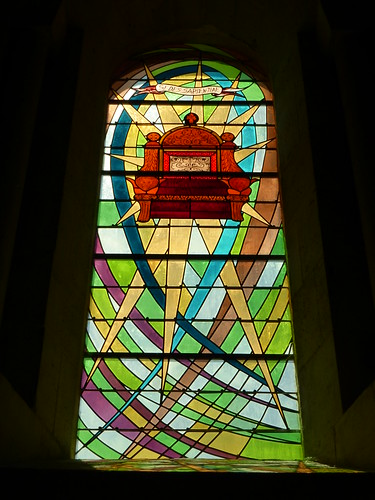 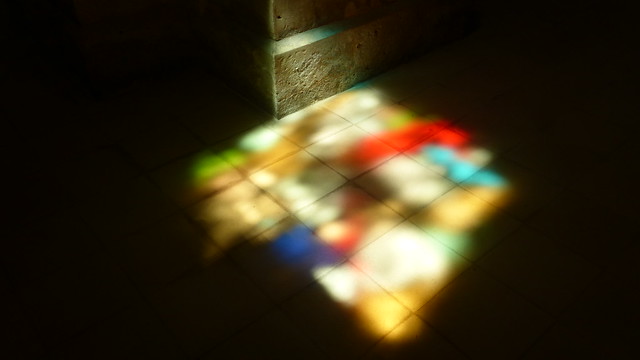 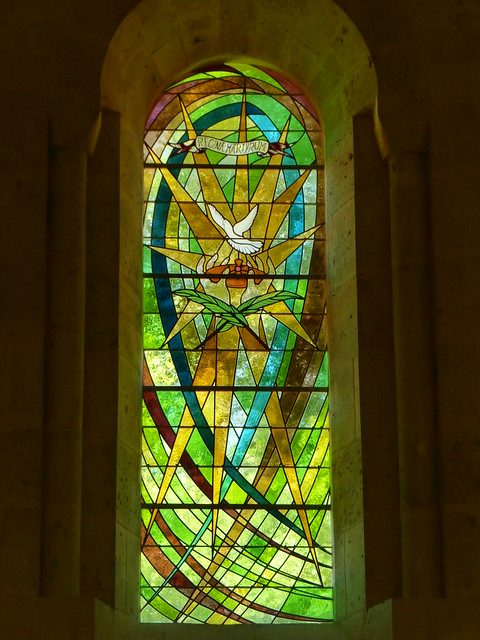 There were so many splashes of color along the floors and walls.  It isn't very often you see such a rainbow. 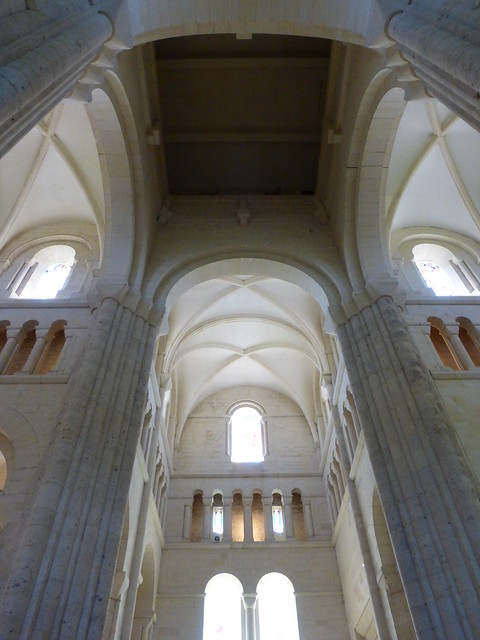 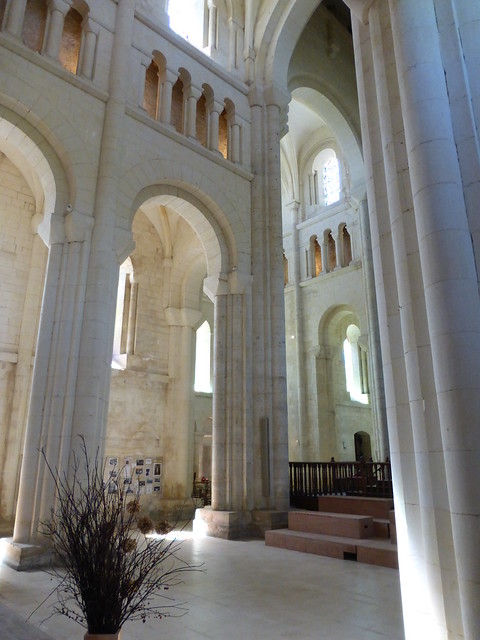 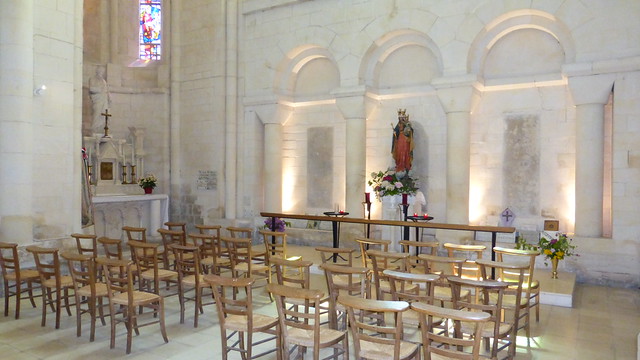 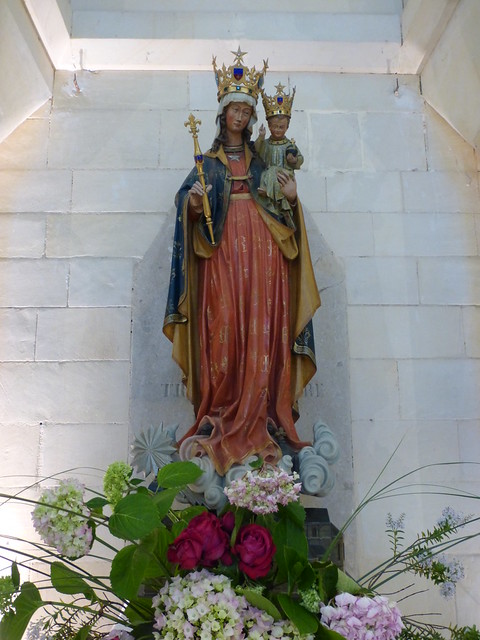 Along the norhtern wall is the chapel devoted to Notre-Dame de l'Étoile (Our Lady of the Star) where worshipers come to pray for world peace.  After visiting the abbey and the grounds, I drove into the town to visit l'église Saint-Jacques.  It was partially destroyed during World War II and there are still some bullet impacts along the exterior walls. 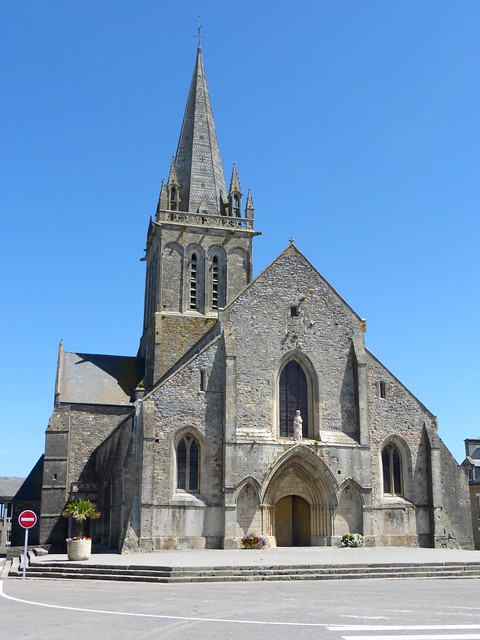 Its construction was decided upon by the Abbé de Montebourg at the beginning of the 15th century and it was consecrated on September 2, 1329 by the Bishop of Coutances, Guillaume de Thieuville. It is rather dark inside and there are a few things of interest to see. 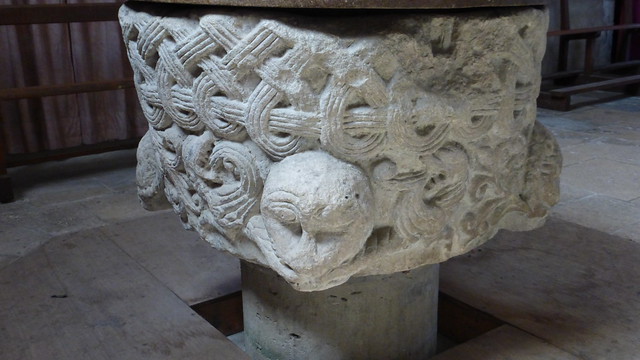 For starters, there is the baptismal font which is actually an old column capital adorned with animal faces and an intricate interlace pattern. It dates from the 11th century. 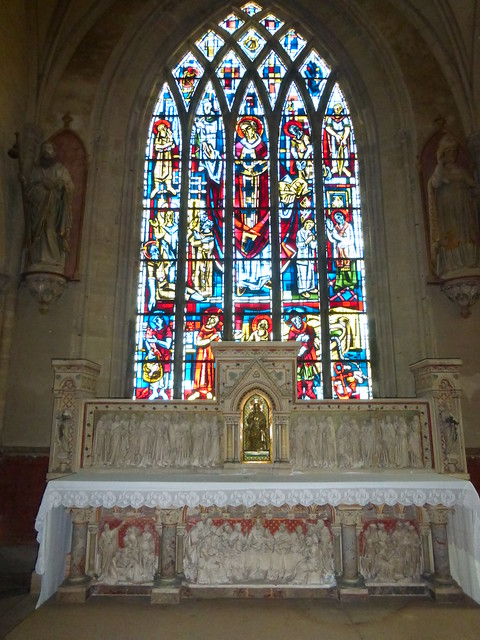 Behind the rather uninspired main altar is the original high altar adorned in bas-reliefs and backlit with a large stained glass window. 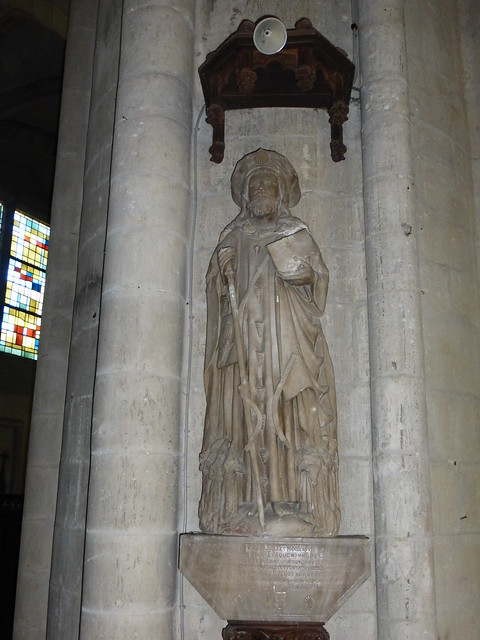 There is also a statue of St-Jacques in the choir from the 14th century. 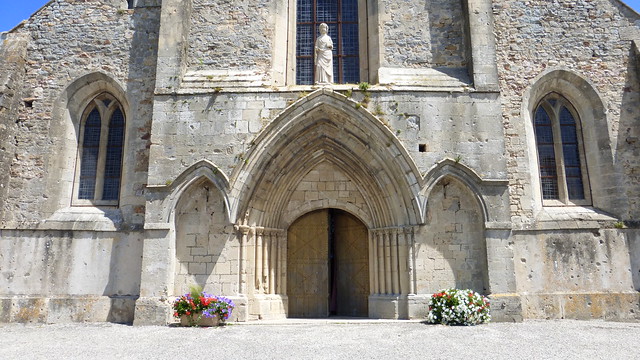 Another 14th century statue of St-Jacques stands outside above the portal to the church. 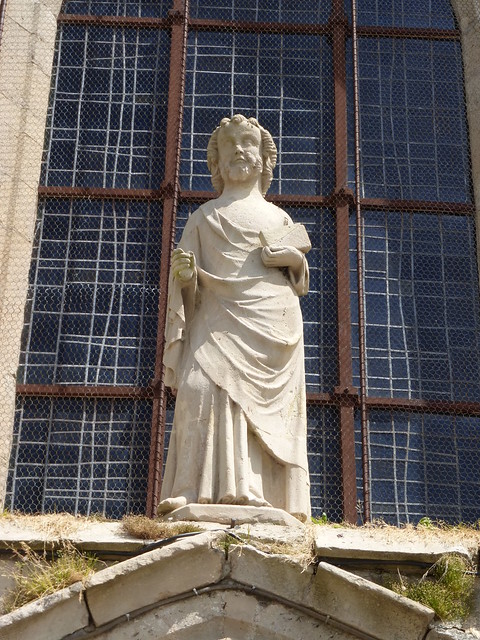 In July, there is a solemnity to the town's patron saint and the parishoners crown the statue with roses. To finish the day, I wanted to find a place that served ice cream but could only find a chocolate maker, Territoires Chocolats where everything could be tasted before buying. Wouldn't you know it, as I was driving out of town, I saw a sign for ice cream just outside of a resturant near the chocolatier--just another example of my luck (or lack of) in life. 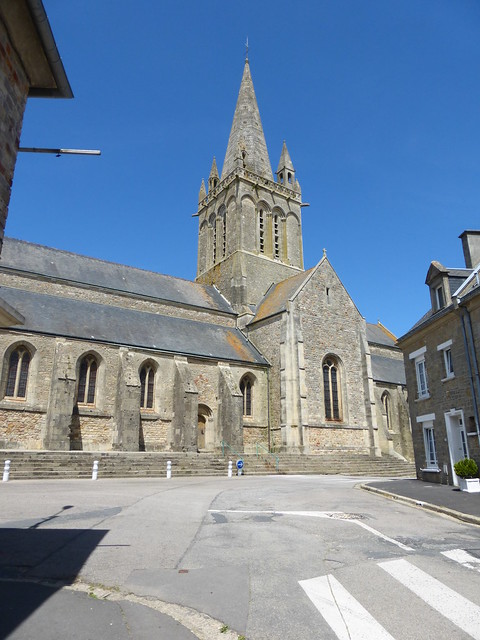