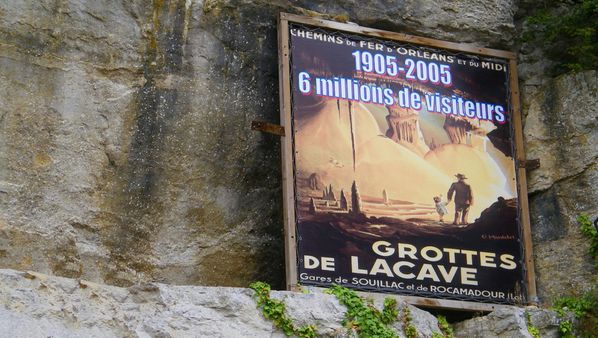 Near the valley of the Dordogne as it makes a deep cut through the Gramat Causse, a series of caves was discovered in 1902 by Armand Viré, a student of the geographer and speleologist Édouard-Alfred Martel, at the foot of the cliffs beside the river.  Just before entering the cave, be sure to admire the Château de Belcastel nearby. Constructed in 930 by Adhémar des Echelles, Vicomte of Turenne, only the eastern part of the main wing, the tower keep and the small chapel date from the Middle Ages; most of the other buildings were rebuilt later. In order to reach the enormous caverns of Lacave, one must first take a train ride through a tunnel that was blasted through the hillside to provide easier access to the caves.  It extends for 450 meters and gradually rises about 50 meters. After exiting the train, one reaches the galleries which extend for 1.6 km on foot.  If you don’t like stairs, this excursion is not for you. Inside, the galleries divide into two sections: concretions and stalactites prevail in the first; in the second, underground rivers run in between natural limestone dams (gours) and flood out into placid lakes. In the Salle des Merveilles, the stalactites are lit using a black-light.  In the eerie darkness, the tips of the stalactites gave the impression of being surrounded by fireflies. Normal lighting is used to enhance the reflections of the concretions in the still waters of the lakes.  Flash photography is not allowed but I managed to get some nice photos using the timer on my camera. Be sure to wear a jacket or sweater as the temperature inside never reaches beyond the constant 14 °C / 57 °F.