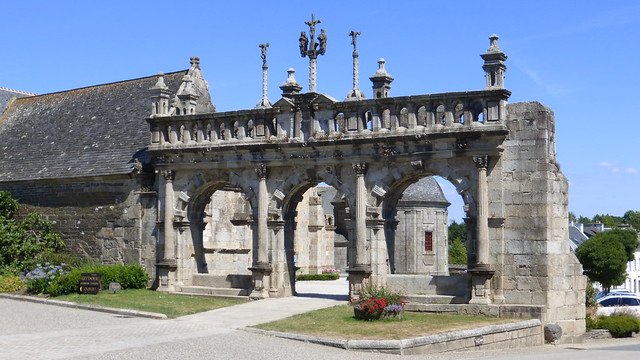 The triumphal arch of the enclos paroissial in Sizun dates from 1585 – 1588. Its central part is surmounted by a Calvary and a walkway where priests could celebrate Mass in the open air. A stone stairway gave access to the upper gallery but it was removed during the widening of the adjacent road. 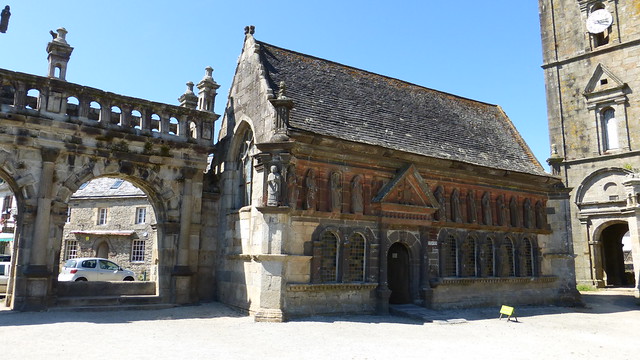 The ossuary chapel (1585) has a façade decorated with caryatid statues and the Twelve Apostles. Above the doorway are the arms of the Rohan family which bears two inscriptions: Memento Mori -"Souviens-toi qu'il faut mourir" (Remember that you will die), and "Vous nos enfants qui par ici passés, souvenez-vous que nous sommes trépassés" (You, our children who pass through here, remember that we are dead). 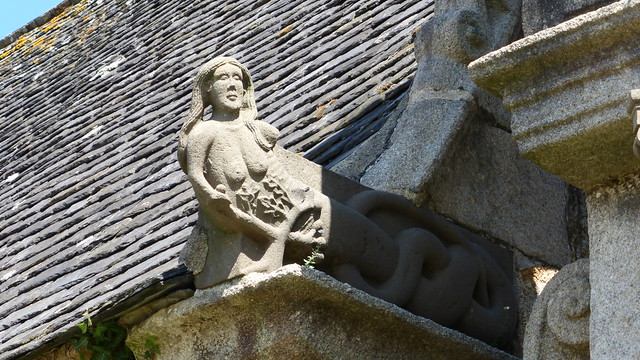 One of the strange sculptures on the roof depicts a mermaid carrying traces of seaweed. 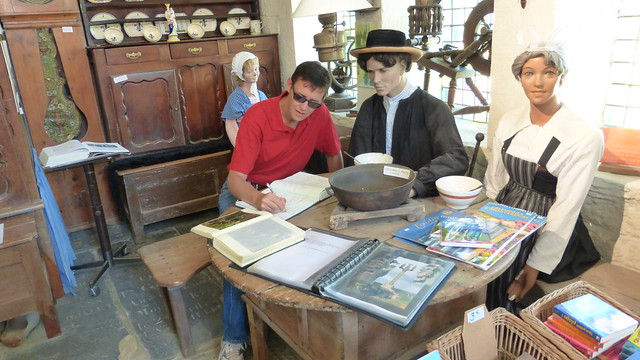 The ossuary chapel is now a small museum featuring Breton arts and crafts which includes local costumes, furniture and embroidery—before leaving Sizin, I left some kind words in the visitor book. 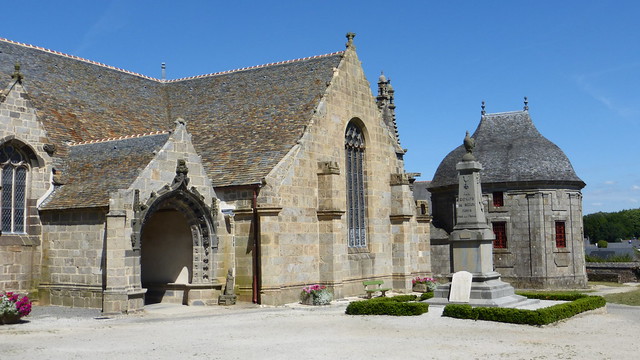 The churchyard, which once was the cemetery, now has a monument to those who died during both World Wars. From this angle one can see the sacristy which is octagonal in shape and has an upturned-keel roof covered in slate. 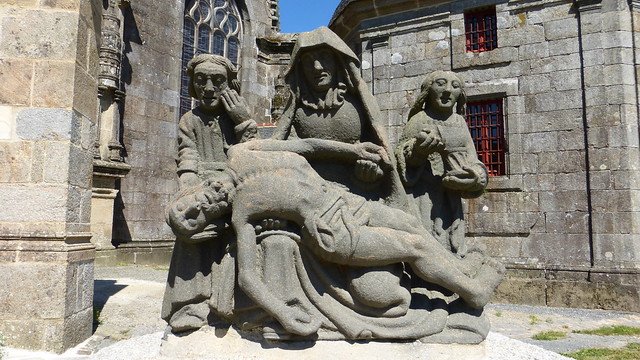 Although there is no grand Calvary in the center of the close, there is a unique grouping of statues depicting the Descent from the Cross. 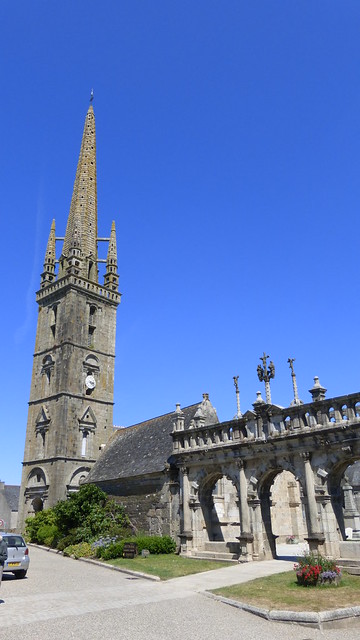 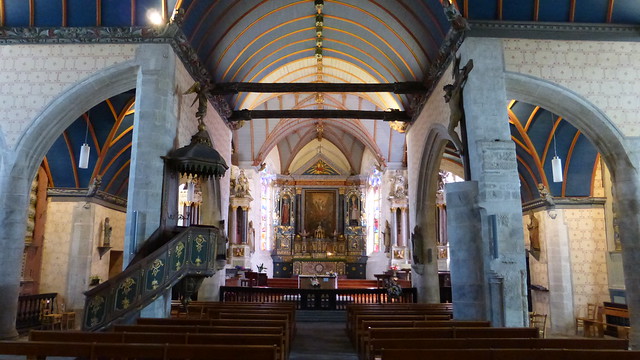 The interior of the church is simply stunning to behold due to its ornately carved altars and its wood pulpit created in 1784.  The main altar was built in the 17th century by a sculptor from Landerneau named Maurice Le Roux. 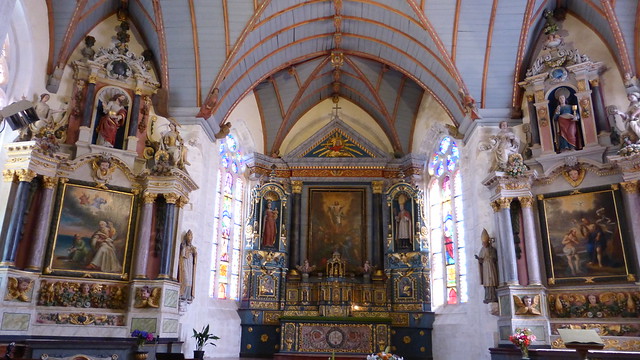 Above the tabernacle is a painting depicting the Ascension of Jesus which is bordered by two polychrome statues in niches of Notre-Dame and Saint-Suliau. It is surrounded by two more altars built on the same model. The one on the left contains a painting of Saint Augustine with the angel and the one on the right depicts the Christ’s baptism. 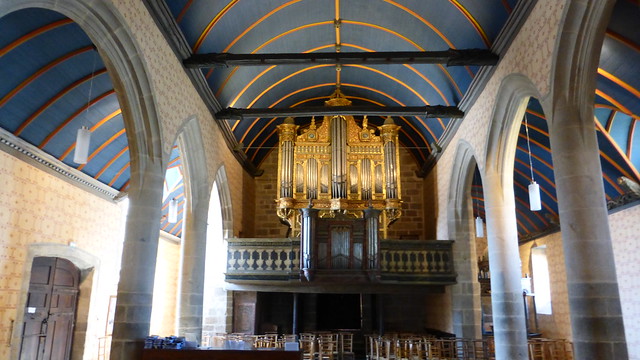 The organ was created by Thomas Dallam, son of organ builder Robert Dallam (1602-1665) who designed many instruments for churches in Finistère. The organ was restored in the 18th century and was painted a dark brown in the 19th century. It has now been restored to reveal its original polychrome designs. Within the transept, religious items such as vestments and silverware are on display. There are also several glass cabinets with processional banners inside. 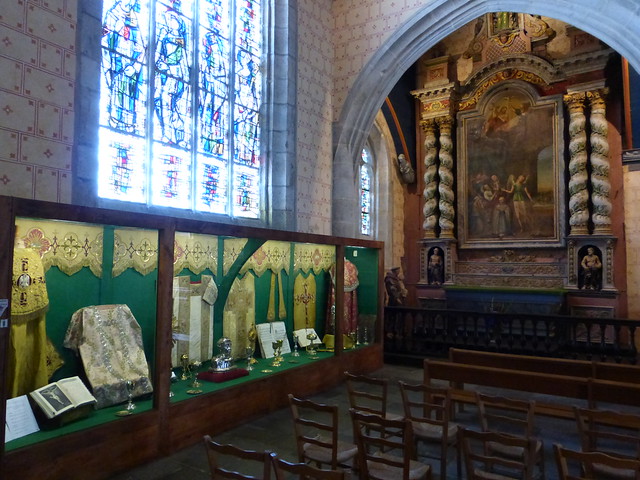 The alter of the Holy Rosary has two twisted columns that frame a painting of the death of a faithful person in the presence of Dom Michel le Nobletz, a famous Breton missionary from the 17th century. The altar has statues of Saint Peter and Saint Paul on either side as well as a statue of Saint Joseph at the top. 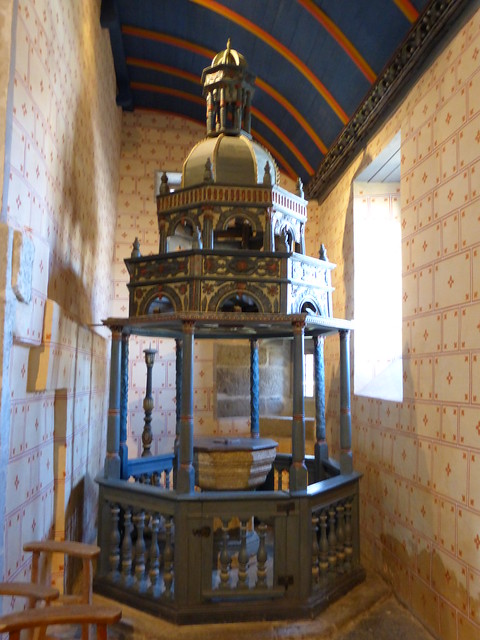 The granite baptismal font is dated 1679. It is surmounted by a canopy supported by eight columns, four plain and four ornamented.