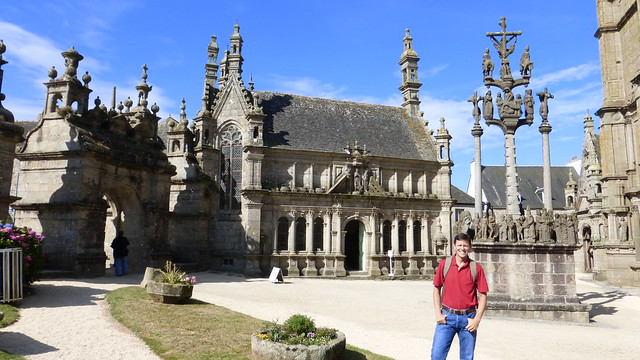 It almost feels like I will never get caught up on all the articles I wish to write about the places I’ve visited in France. I guess I will just keep posting until I run out of photos. Last summer (yes, it’s been that long), I went on several trips to Brittany and Finistère. Some of the most popular attractions in the region are the enclos paroissiaux or parish church yards with their impressive churches embellished with sculpture and decoration of Catholic iconography, mostly Baroque in style. 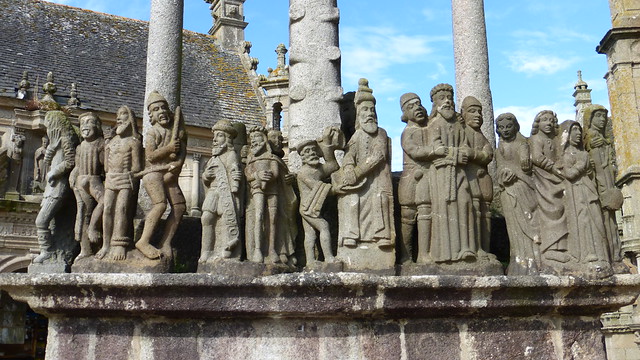 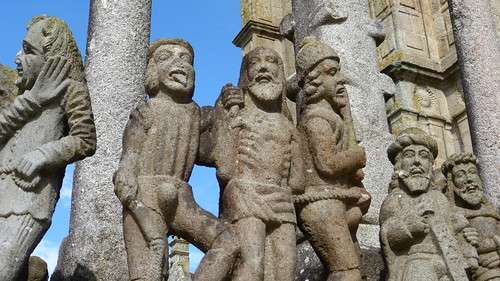 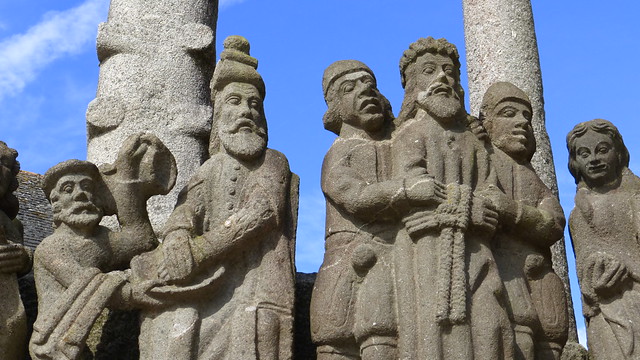 The enclos paroissial, also known as a parish close, is an enclosed area around the parish church which usually includes a ceremonial arch, a cemetery, an ossuary or charnel house, and a Calvary. The Calvaries are significant works of popular art. Usually they display three crucified figures: Christ and the two thieves. At the base, they may feature relief panels, free-standing sculptural groups or both. The onlookers of the crucifixion nearly always include the Virgin Mary and St. John the Apostle, but also many other heroes and villains. 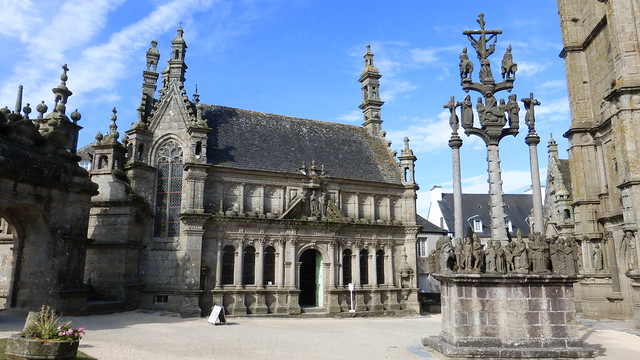 The first parish close that I stopped to visit was that of the Église Notre-Dame de Saint-Thégonnec. It features a large ceremonial entrance arch which stresses the importance of the parish close as a focus for local pilgrimages and annual pardons. The parishs close of St. Thégonnec was built between the 14th and 18th centuries and is one of the most visited monuments in Finistère. It is circled by a wall which includes a triumphal arch, an impressive Calvary as well as an ossuary. 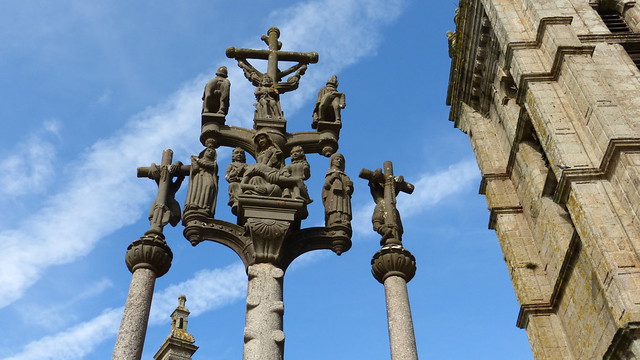 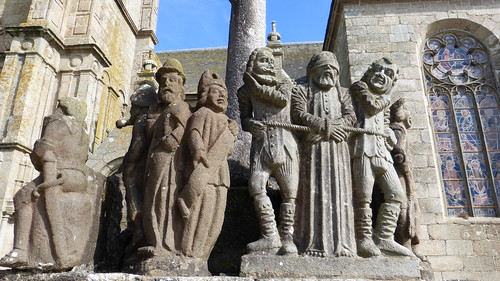 The Calvary, erected in 1610, is one of the most magnificent in all of Brittany adorned with many statues depicting the Passion of Christ. Below it is a small niche which shelters St-Thégonnec with the wolf he harnessed to his cart after his donkey had been devoured by wolves. The funeral chapel and ossuary were built from 1676 to 1682. Inside is a 17th century altarpiece with spiral columns. In the crypt, under the altar is a mise au tombeau (Holy Sepulchre) with figures carved in oak and painted (1699 – 1702), the work of a Breton sculptor, Jacques Lespaignol. The architecture of the church is rather plain, but it is richly decorated with altarpieces, altars, statues, stained glass and paintings. It has been remodelled several times. The only trace of the old building is the gable belfry (1563) on the left of the tower. The Renaissance tower is crowned with a dome with a lantern and corner turrets. A fire in June 1998 caused the roof to collapse and severely damaged the five chapels on the north side. Ten fire companies and local volunteers were able to keep the flames from damaging the rood screens, the windows, the organ and the pulpit. 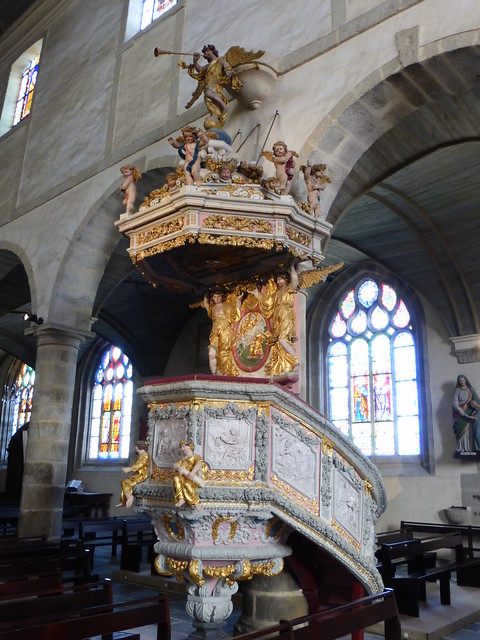 The pulpit (1683) is one of the masterpieces of Breton sculpture. The corners are adorned with the four Cardinal Virtues, while the Evangelists are depicted on the four panels. On the medallion at the back, God is giving the Tablets of the Law to Moses. The sounding board (1732) decorated with angels and roses, is surmounted by the Angel of Judgement blowing a trumpet. The apse as well as both arms of the transept are covered with restored woodwork dating from the 17th and 18th centuries. The main altarpiece is dedicated to St-Joseph. The most impressive altar however is that of the Rosary. 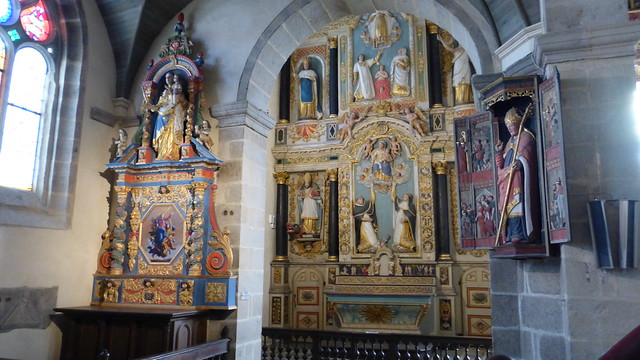 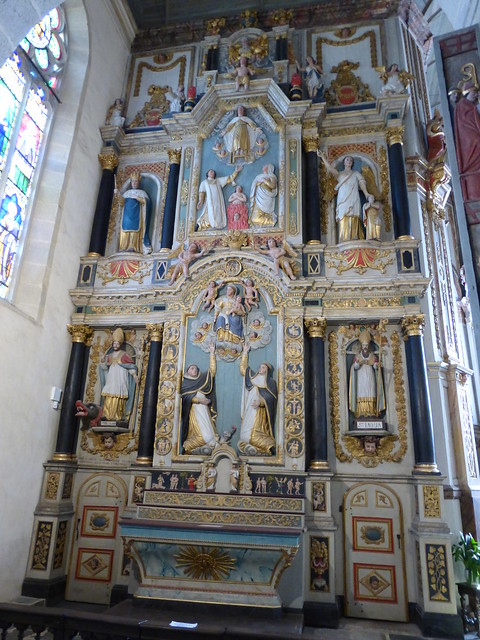 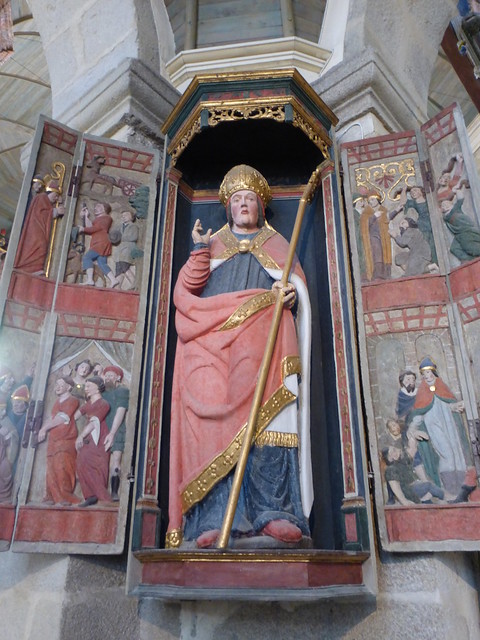 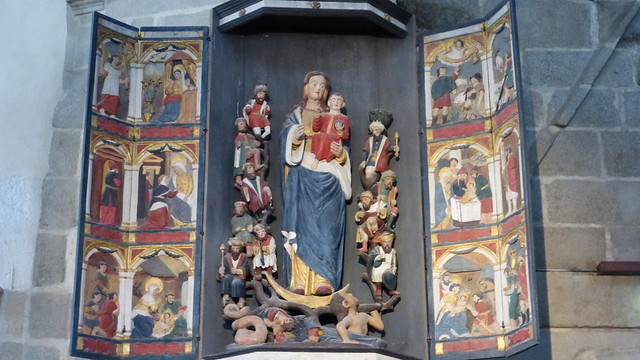 Above the entrance porch is a niche that features the Virgin of the Apocalypse framed by a Tree of Jesse which depicts the royal ancestors of Christ. The flaps on either side are decorated with the Joyous Mysteries from the Rosary.

Published by The Baguette - in Architecture
<< LANDIVISIAU RANDONNÉE -- LE CUL-DE-FER,... >>