During the Allied invasion of Normandy, the United States Army Graves Registration Service established two large cemeteries with fallen American and German soldiers near the village La Cambe, about eight kilometers east of Isigny-sur-Mer.  After 1945, the United States relocated its dead to the newly laid out graveyard of Colleville-sur-Mer, and moved the fallen German soldiers from there to La Cambe.  Thus there arose from the two cemeteries formerly occupied by Americans and Germans the separate cemeteries we know today.  See my earlier post about Colleville-sur-Mer HERE. The fallen German soldiers lay at the end of the war in the departments of La Manche, l’Orne and Le Calvados in some 1,400 townships.  In 1956, the Volksbund Deutsche Kriegsgräberfäsorge (German War Graves Commission) began bringing together the dead in six graveyards in Normandy.  The others are : The extension and lying out of the grounds made necessary a renewal of the surrounding bank.  An international youth camp of young people from many nations accomplished this work in 1958. The volunteers also worked on building up the almost six meter high tumulus, which has taken in 207 unknown dead and 89 who are known by name yet placed in a “Kameradengrab” (mass grave).  On its peak stands a mighty basalt lava cross with two side figures. The cemetery was inaugurated on the 21st September 1961.  The site is dotted with trees and Maltese crosses arranged in groups of five.  The German dead are buried two or more underneath small cross-shaped slabs (nearly flush with the short grass). 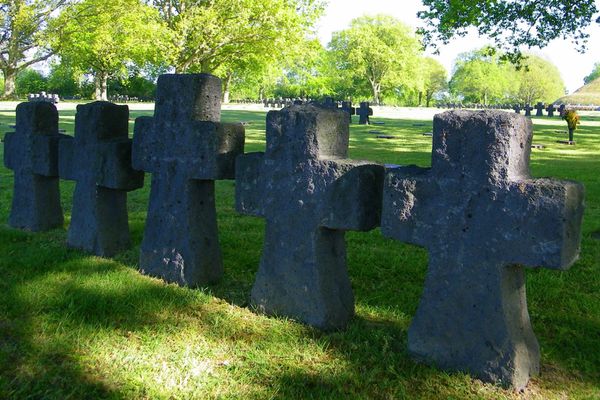