Crowning a 30-meter high hill, half a mile from the village of the same name, the German military cemetery of Huisnes occupies a commanding position overlooking the curve of the bay of Mont-Saint-Michel. Here lie 11,956 German war dead.  Nearby, at Avranches, the Americans launched their decisive breakthrough into enemy lines on July 30, 1944. The hill at Huisnes is unique: the only German ossuary in the country, the result of the disinterments made by the Volksbund (the German War Graves Organization) in 1961, bringing together the remains found in the Departments of Morbihan, Ile-et-Vilaine, Mayenne, Sarthe, Loire et Cher, Indre et Loire, Vienne et Indre, and also from the Channel Islands – Jersey, Guernsey, Aurigny and Sark (except for those graves in the cemetery of Port George in St. Peter Port, Guernsey). 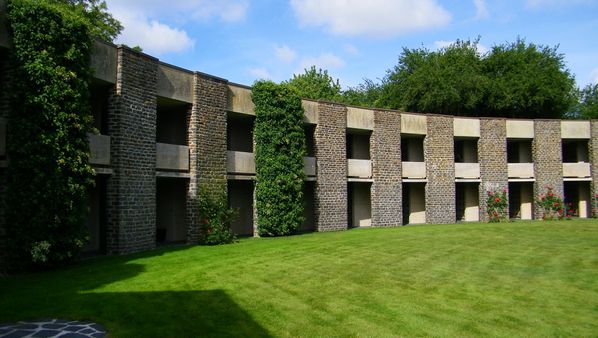 The mausoleum is a circular structure, 47 meters across, and built on two floors, each floor consisting of a gallery giving on to 34 crypts on each level. Within each crypt are the bones of 180 war dead: their names are inscribed on a bronze plaque.  A tall cross rises above the central grassed area.  The mausoleum was inaugurated on September 14, 1963. Published by The Baguette - in Basse-Normandie
<< MONT-SAINT-MICHEL DOMFRONT, CITÉ MÉDIÉVALE >>