It hardly seems possible that another summer has come and gone.  Yet, the warm weather, uncharacteristic of the region has managed to linger on into this first week of September.  Before I return to my French class on the 13th, I wanted to take advantage of what little time I had left before the seemingly endless chill of fall and winter sets in around me.  One of the many places in the Orne Department that I visited over the weekend was the Château d’O near Mortrée.  It is a private residence and is only opened one month out of the year.  Entry is free to the visitor.  Despite its true nature as a château “d’eau” which is surrounded by water, the name Château d’O derives from the O family who began its construction in 1484.  The château is built on stilts on an island in the middle of a pond. The calm water of the moat reflects the gracefulness and imaginative style of the early Renaissance Norman architects. The château consists of three ranges of buildings framing a courtyard which is open on the north side facing the moat, gardens, orangery and 19th century chapel. The east wing is the oldest part of the château (late 15th century).  The Gothic core is decorated with new motifs of the French Renaissance.  Wide windows open to the park.  The ornamentation is particularly delicate in the inner courtyard.  The many sloping roofs, the slim turrets and the walls patterned in brick and stone make a charming ensemble.  The 16th century south wing consists of a floor with large window bays over an arcade divided by slim columns decorated with ermines, the emblem of the house of O. No photos are allowed inside the château.  There is no souvenir shop offering postcards or guidebooks either.  Instead, one must rely entirely on information found on the internet or from the person showing the property (not a proper tourguide).  The long mirrored hallway of the south wing is reminiscent of Versailles.  It leads to the first of two rooms on display for the public.  The sitting room has recently been restored and depicts over a dozen Greek statues painted in trompe l’oeil along light blue walls.  The second room is commonly referred to as the marble room despite the fact it contains no real marble.  Instead, the walls are painted in earth tone hues using a faux marbling technique. The west wing which dates from the reign of Henri IV, is built of brick and stone and decorated with carved medallions.  The downstairs room of the west wing has a fully functional kitchen that includes an original “potager” (a sort of oven in which one could simmer meat stews and conserves).  It is entirely decorated with numerous copperware utensils in part from the 18th century.  The abundant tile work is made of an intricate blue ink on white background design. 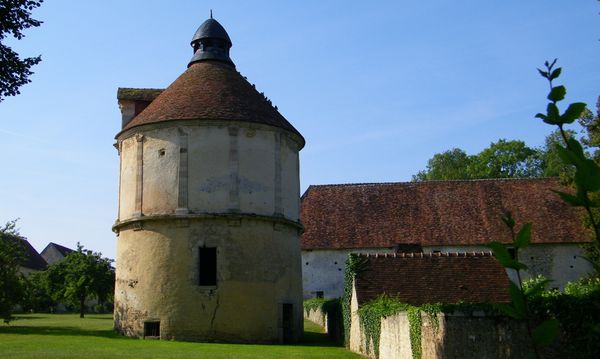 All of the buildings belonging to the Château d’O are registered as historical landmarks including the farmhouses, the dovecote, orangery and the elegant winter garden laid out in the shape of Saint Andrew’s cross.

Published by The Baguette - in Orne
<< SÉES CARTERET >>