The pretty and lively city of Avranches is one of the oldest towns in Normandy and its origins date back to early antiquity.  Saint-Aubert, Bishop of Avranches in the 8th century, instigated the foundation of Mont-St-Michel and the two centers are therefore closely linked not only geographically but also historically. Legend has it that a dense forest covered Mont-St-Michel Bay when St. Michael appeared twice before Aubert and commanded him to raise a chapel in his honor on the rock then called Mounte-Tombe.  Although sanctuaries to St. Michael were built by tradition upon high rocks, the Bishop of Avranches remained sceptical and vacillated.  St. Michael settled the matter by reappearing and digging an imperious finger into the doubting man’s skull.  Aubert could delay no longer. A skull with a hole in it is displayed in the treasury of the Basilique Saint-Gervais recalling this legend.  Sadly, the basilica was closed during my visit and I could only get these few photos of the exterior. Spread out to the west of the city is the Jardin des plantes.  The botanical gardens, once the property of a Capuchin monastery that was destroyed during the French Revolution, are well situated on a gentle slope below the town. Up until 1882, the grounds were a famous botanical park used for medicinal purposes.  At the far end of the garden is a panorama of the bay. The doorway from the 11th century chapel of St-Georges-de-Bouillet, which was set up in the garden in 1843, stands facing the huge restful bay.  From Place Daniel-Huet, one can walk along the garden paths to reach the site of the old Cathédrale Saint-André.  In very poor condition by the 18th century, it collapsed one night in April 1794. 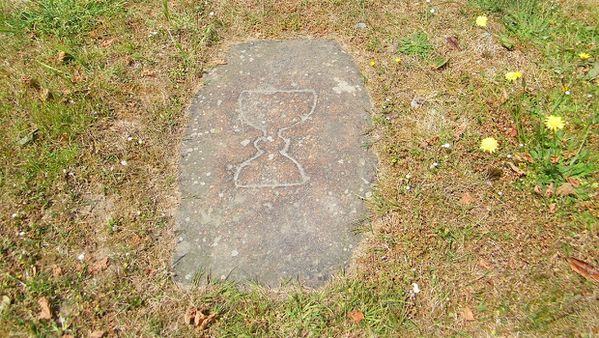 Nothing remains but this little square, known locally as la plate-forme.  It contains the paving stone marked with a chalice on which Henry II made public penance on May 22, 1172 for the death of Archbishop of Canterbury, Thomas Becket. The former bishop’s palace now serves as a museum dedicated to the Avranches Archaeological Society.  The buildings here date from the 14th and 15th centuries. The previous church of Notre-Dame des Champs was situated, as its name implies, in the fields outside the southern part of the city.  Not much is known about the original edifice except through a few engravings from the 17th century.  It became too small for worship and in 1855 it was decided that a new church should be built. A member of the parish, an architect named Théberge drew up the plans and the specifications.  However, it was not until April 12, 1855 that the cornerstone was laid.  At that time, work really took off but there was the serious question of how to finance such a grand scheme. The bold proportions of the new church broke completely with the modest one it was replacing.  The means of the city and the parish were inadequate, especially as the rebuilding of Saint-Gervais had already cost the town dearly.  In 1865, the mayor of Avranches and the archpriest went to Paris to seek financial assistance from the state. It took a long time before the assistance was granted in 1876 and the consecration of the church by Bishop Monsignor Germain on November 13, 1892.  The construction of the building was plagued with problems and tragedies during its slow construction.  In 1868, a mason fell from the rose window where he was working.  The architect Théberge died in 1866 and was replaced by Cheftel. Work was once again delayed during World War I when all the manpower was mobilized to fight the Germans.  The two towers of the façade were completed between 1926 and 1937.  Sadly, the church was severely damaged during World War II by firebombing of the city.  The restoration work took several years and Notre-Dame des Champs was reopened for worship in February 1962.  Its neo-Gothic style is its most beautiful feature with extremely large windows of clear stained glass allowing an abundance of light inside. Its exterior is decorated with numerous gargoyles that depict strange and imaginary creatures. Nearby is the church of Saint-Saturnin.  Quite a few archaeological discoveries have been made in the surrounding region, which seem to date the area as a religious site as far back as the Middle Ages.  In 1961 the remains of sarcophagi were uncovered around rue Saint-Saturnin that complemented the information provided by the discovery in 1959 of Merovingian tombs in the choir of Notre-Dame des Champs.  In 1988, new graves were discovered during the construction of the Crédit Mutuel confirming the presence of a paleo-Christian religious site in this area of the city.  Today, nothing is visible of this ancient occupation, and, apart from a few old houses, the area is a thoroughly urbanized space with a definitive twentieth century footprint. The church of Saint-Saturnin itself is considered rather old since it was rebuilt in the late 19th century.  Before this final restoration, the building had characteristics of the late 17th and early 18th century.  However, the western porch overlooking rue Docteur Gibert remain and date as far back as the 13th century and are considered by some historians to be the oldest in the town. A report, from 1836, states that the church was in excellent condition and required no internal or external maintenance.  However, a transformation of the church was decided upon because of its small size.  At that time the population had increased by a fifth since 1789 and on market days the church was packed. 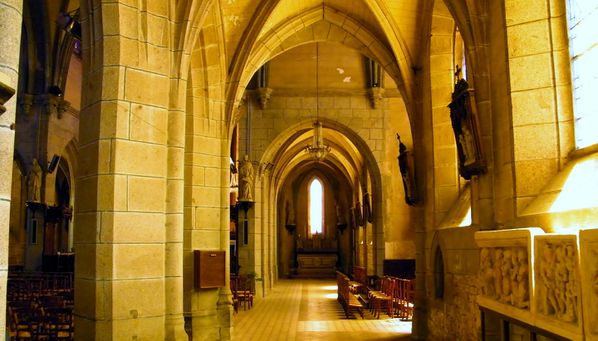 In 1846, Abbé Caillemer stated that Saint-Saturnin could not contain the increased numbers of parishioners and as a result, something must be done.  Significant work was undertaken by a priest to enlarge the building.  Started in 1846, the aisles of the choir were completed in October 1847 and then in 1852 the chapels of the north and south transept were created. In 1865, the choir was raised to a new height to blend in harmoniously with the new constructions.  As with the nearby church of Notre Dame des Champs, a façade in the neo-Gothic style was created.  In 1944, the only damage it suffered during World War II was the destruction of its stained glass windows and from June 8 it was reopened for worship.  The modern stained glass windows are orange and red creating a warm glow inside yet in my opinion, the interior still is exceptionally dark. Near the entrance are three bas-reliefs depicting Joseph and Mary’s flight to Egypt as well as the Massacre of the Innocents. The Patton Monument is erected on the site of a strategic crossroads located south of the town and destroyed during the air raids of 1944.  The imposing memorial commemorates the deployment of General Patton’s troops toward Brittany and the areas surrounding lower Normandy (in July 1944 with the American 3rd Army). The square on which it stands is now American territory—the soil and trees were brought over from the United States.  It was from Avranches on July 31, 1944 that General Patton began the swift advance that smashed the German Panzer counter offensive launched from Mortain. The breakthrough marked the beginning of the attack that was to take the American 3rd Army through to Bastogne in Belgium.

Published by The Baguette - in Basse-Normandie
<< CHAPELLE ST-PIERRE, MONTBRAY MONT-SAINT-MICHEL >>